Location, Infrastructure, and State of Exploration

The Project is defined by 137 federal lode claims on BLM land and one patented claim, totaling 1150 hectares. It is in Esmeralda county, 30 km southwest of Tonopah, NV and 18 km northeast of Scorpio Gold Corp's Mineral Ridge mine (Figure 1). There is no permanent infrastructure on the Weepah project, however work is facilitated by access via paved state highways and well established and maintained dirt roads – power, materials and labor are all accessible nearby. Relief on the property is overall gentle with outcrop exposure being limited to the few steep areas and within the pit itself.

The Property has produced 117,000 ounces of gold at grades between 3 and 6 g/t Au and has two main exploration targets that have only recently been consolidated into one package by the Company: thus the Company will be the first to explore the district as a single project. The Property has 126 known exploration drillholes with the vast majority positioned solely in the known occurrences: step-out drilling from these occurrences has been limited, erratic, poorly documented, and often off-trend, especially in the intermontane basin south of the known occurrences (Figure 2). Many of the holes no longer have assays attached to them and/or are shallow rotary holes[1].

A plethora of historical prospect pits, shafts and adits occur away from the known occurrences, yet there appears to have been extremely limited rock sampling of these occurrences in modern times: even pits that appear to be on trend with the existing mineralization have experienced markedly little modern sampling.

Prior to the Company's acquisition of the project, no soil surveys had been conducted in either the intramontane basin that bounds the occurrences to the south, nor in the colluvial zones over existing bedrock.

Overview of The Opportunity

The Weepah exploration project offers a relatively unique set of opportunities. The Company could opt to step out on existing ore grade mineralization, thereby increasing the overall size of known mineralization, as well as discover new mineral occurrences by expanding surface geochemical sampling and by deducing the district scale controls on mineralization, something which has never before been attempted due to the fragmented property positions in the district (Price, 2016).

Less is known about the Weepah East deposit: although there are some historical shafts present, there is no record of previous mining. As it is located on the edge of an intramontane pediment, mineralization is poorly exposed, and drilling has been limited and erratic (fanned holes instead of grid drilling). Gold mineralization is likely controlled by both structural geometry and by receptive carbonate host rocks. Nevertheless, Weepah East has produced drill intercepts which would be considered ore in many modern open pit scenarios, including 27.4 m of 1.2 g/t Au, 10.7 m of 1.6 g/t Au and 38.1 m of 1.2 g/t Au, all drilled from the surface. A hole drilled 500 m to the south of these holes in intramontane pediment encountered 5.9 m of 0.8 g/t Au and 9.1 m of 0.9 g/t Au. There are no holes south or west of this intercept along trend.

As well as having mineralization open in all directions, the Company believes that the best long-term opportunity is in being the first company to explore all prospective targets simultaneously since the Property was consolidated in 2016. Details of the Company's exploration plans are outlined below.

Geographically, the Weepah project is in the Weepah Hills southwest of Tonopah, NV in the central portion of the Walker Lane. The Walker Lane is a northwest-southeast oriented dextral shear zone situated in between the Sierra Nevada batholith to the west and the Basin and Range to the east. The Walker Lane is a long-lived structural discontinuity, subparallel to the San Andreas fault, and is associated with a series of gold and silver deposits that host over 80 M oz Au and 700 M oz Ag[2]. The greatest concentration of mineral deposits are volcanic-hosted precious metal deposits[3] but also include orogenic shear zone related gold deposits such as Mineral Ridge and Weepah[4]. Mineral Ridge and Weepah are hosted in metamorphosed sediments and intrusive rocks that have been subjected to extensive folding, thrust faulting, low-angle detachment extensional faulting, and younger high-angle normal faulting.

Gold hosting metasediments at Weepah include Proterozoic rocks of the Wyman Formation, which consists of quartzites, quartz-mica schists, phyllites, calc-silicate rocks with an overlying subunit of deformed dolomite (the Reed Dolomite) (Figure 4). The Reed dolomite is itself overlain by Cambrian Campito Formation, consisting of interbedded siliciclastic rocks and quartzites, and the Poleta Formation, consisting of interbedded silty limestones, quartzite, and dolomite, as described by McKee[5]. Metamorphic grade appears to increase down section. This entire metasedimentary sequence is intruded by Mesozoic and Cenozoic igneous rocks, including Cretaceous age quartz monzonites of the 85.3±4.3 Ma Lone Mountain series [6] and plutons, diorite sills, leucogranite dikes and mafic dikes of the Weepah Complex[7].

The Weepah district is located in a southeastern plunging anticline cored by the granitic Weepah pluton. Structure at Weepah is characterized by broad flexures, minor thrusting and high-angle faults[7]. Deep drilling of the Weepah shear zone west of the historic mine intersected the mineralized fault zone completely within the Weepah pluton[1], indicating that shear zone development and mineralization post-dates magmatism. The brittle and often planar nature of the shear zone indicates that mineralization took place well after the intrusions had cooled. As such, the relative timing of mineralization may be similar to mineralization at Mineral Ridge, which postdates intrusive host rocks by ~15 Ma, occurring at 76.0±1.8 Ma[4].

The two known gold deposits at Weepah are; the Weepah West shear zone where the historic pit is located, and the Weepah East zone. The Weepah West shear zone is a quartz-iron oxide filled, northeast-trending, dextral oblique slip shear zone dipping ~45° to the west. Gold occurs predominantly as free grains, (or within iron oxides) in a silicified gouge zone composed of quartz and altered country rock [7]. The quartz is multi-episodic, some crushed by later continued movement on the shear zone, and some uncrushed, presumably post-tectonic.

The Weepah East zone is characterized as a near-surface, shallowly dipping, recrystallized carbonate or carbonate replacement horizon[1]. Less is known about Weepah East as there is no reliable bedrock and drilling has been limited to reverse circulation and erratic, fanned drill holes. Mineralization at Weepah East may be structurally controlled by one of two faults zones identified during the first phase of exploration (Figure 5). The existence of newly identified faults such as the Tailings Wash, East Weepah and Central Pediment faults has been supported by the technical teams geologic mapping, geochemistry in soils, reinterpretation of geophysics and historic drilling (Figure 6). Surface geochemistry revealed these faults may source signature elements associated with gold. Reinterpreted Controlled-Source Audio-frequency Magnetotellurics (CSAMT) showed evidence of these faults (Figure 7) and drill holes along the margins of these fault zones contain encouraging intercepts of gold mineralization.

A recent channel rock sampling program targeted the intersection of the interpreted Central Pediment fault with the Weepah Pit to test the hypothesis that stronger mineralization should occur where the Weepah Shear zone and this fault intersect. Historic underground and open pit mining focused on extracting ore solely from the Weepah Shear Zone, a 4- to 10-meter-wide fault zone dipping 40° to the west that produced a head grade of 5.8 g/t gold. The footwall rock is largely composed of shallowly oriented phyllites with similarly dipping felsic dikes. Channel samples were taken from numerous high-angle, WNW-ESE striking, small displacement faults, occurring in a ~130 meter wide fault zone, that composes the Central Pediment fault (Figure 8, 9). Mineralization appears to be focused where high-angle structures cut brittle features such as bull quartz veins and felsic dikes. A very similar character of mineralization was described in relogging of core holes from Weepah East (see June 22, 2021 News Release).

Pediment soil sampling conducted during the initial exploration phase was designed to detect even the most subtle geochemical signature from bedrock and structures buried beneath the overlying pediment. Results of the pediment soil program, including elevated arsenic, thallium and gold concentrations led the technical team to explore the possibility that the newly identified faults might source some portion of mineralization found in the Weepah Pit. Arsenic, thallium and gold can all be water soluble. In the proper conditions, such as fault zones that act as fluid conduits, these signature elements can be carried from their source, through pediment cover to the surface (Muntean and Taufen, 2006). These transported metals can be detected at very low concentrations when appropriate methods of collection and lab analyses are applied. The results of such pediment soil sampling have helped in discovery of large, buried, Carlin-type deposits, such as the Pipeline deposit in Nevada (Muntean and Taufen, 2006). Applying this method to the exploration program at Weepah, along with mapping and field observations has led the Company's technical team to develop the new fault zone targets shown.

Overall, the 2021 exploration program has been successful in redefining the potential for new deposit discoveries at the Weepah project.

Next steps in the Company's exploration program are to complete two unique drill programs. The first drill program utilizes a sonic drill to penetrate through alluvial cover and test for mineralization in the near surface along the Central Pediment fault. The second program will use a more traditional diamond core drill to step out from the Weepah Pit along the Central Pediment fault. Targets for these drilling programs are primarily based on field and pit mapping, gold in rock sample results, as well as reinterpretation of legacy geophysics. The Company has logged and sampled seven historic core holes, many portions of which were previously unsampled. In addition, the Company's technical team has re-logged rock chips from 29 RC holes as well as compiled data from 120 previously drilled holes into a 3-D database.

Communities and the Environment

The pursuit of environmentally friendly and socially responsible mineral exploration and potential development guides the efforts and activities of Eminent Gold. Eminent Gold and our partners understand the broad societal benefits exploration and mining, but only when the risks and hazards of disturbing the environment are managed through thoughtful implementation of sustainable practices. Eminent Gold strives to maintain the highest industry standards of environmental protection and community engagement at all of its projects.

Eminent Gold believes that sustainability includes pursuit of three mutually reinforcing pillars: environmental and cultural heritage protection; social and community development; and economic growth and opportunity. Eminent Gold assesses the environmental, social and financial benefits and risks of all our business decisions and believes this commitment to sustainability generates value and benefits for local communities and shareholders alike.

There is a Net Smelter Royalty (NSR) of 3% on the Property. The Company may make cumulative payments of US$2.5 million to reduce the royalties payable on the entirety of the Property to 2%. The Company is responsible for Property holding costs during the duration of the Agreement.

All scientific and technical information in regards to the Weepah Property has been prepared by, or approved by Justin Milliard, PGeo.. Mr. Milliard is a qualified person for the purposes of National Instrument 43-101 - Standards of Disclosure for Mineral Projects. 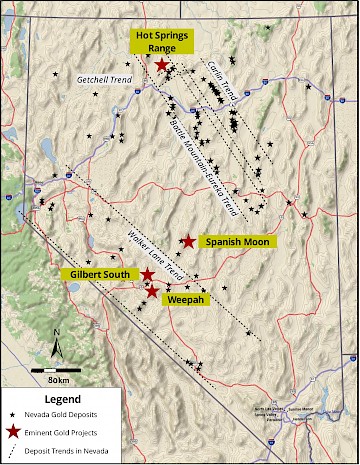 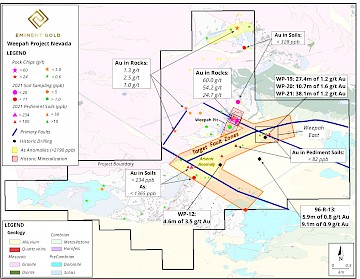 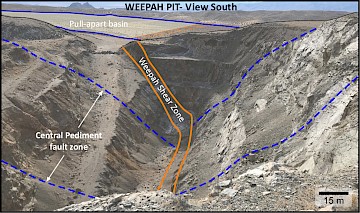 Figure 3. Weepah West pit looking south. The highest-grade portion of the deposit mined during open pit operations (i.e. deepest bench) occurs where the Central Pediment fault zone intersects the Weepah Shear Zone. Also not the degree of iron oxides on the footwall of the Weepah Shear zone (east) as opposed to the hanging wall (west). 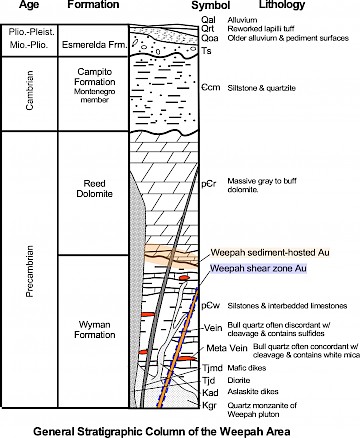 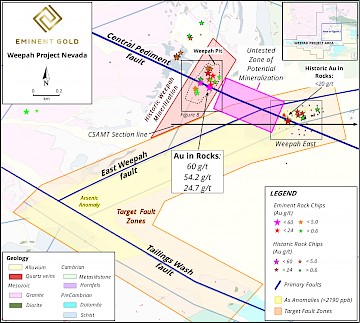 Figure 5. Plan view map of the Weepah target fault zones. The Central Pediment fault transects both the Weepah East and Weepah Pit, and remains untested in between. Location of Figure 8 noted by black box. 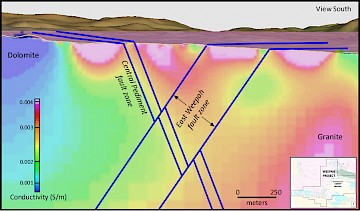 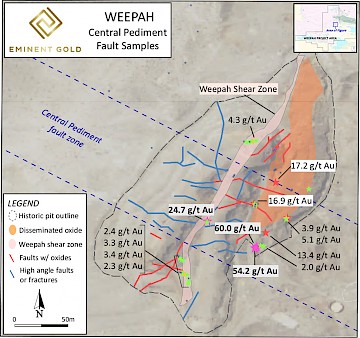 Figure 8. Plan view map of the Weepah Pit region including new channel samples on the footwall (east side) of the Weepah Shear Zone where the Central Pediment fault intersects. 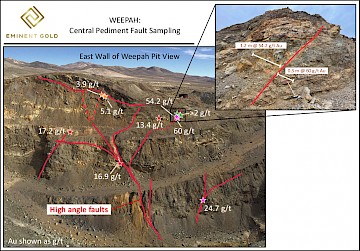 Figure 9. Photos of Central Pediment fault sampling on the eastern high wall of the historic Weepah West Pit. The historically mined Weepah shear zone (not shown) trends north-south and is located on the western side and at the bottom of the pit (beneath the photographer).
© 2022
All rights reserved.
Disclaimer