Vancouver, Canada – July 14, 2021 - Eminent Gold Corp (TSX-V: EMNT) (the "Company" or "Eminent") is pleased to announce that it has successfully concluded its surface geophysical and rock sampling programs at its Hot Springs Range Project (HSRP) (Fig. 1-2). The program both confirms the Company's exploration model and delivers clearly defined drill targets less than 200 meters from the surface under post-mineral cover (Fig. 3-4). The geophysics shows important structural intersections that are present in Carlin-style gold deposits; where steeply dipping feeder faults intersect shallowly dipping thrust faults as observed at the 42 M oz Getchell Trend located approximately 15 km to the southeast of the project.

The rock sampling program has demonstrated the host rocks at the project are gold bearing with results up to 2.8 g/t gold adjacent to the newly defined target areas. Together the geological, geophysical, and geochemical settings of the project have a striking similarity to the Getchell Trend deposits (Fig. 5) and the Company plans to ideally drill the project during Q4 as it looks to make a discovery.

"The positive geophysical results and gold-in-rock surveys are a huge milestone for Eminent as this property has never been explored and yet is so close to multiple world class gold deposits. Our extremely talented technical team has developed this concept and has successfully taken the project from a grassroots stage to its first ever drill program.

Eminent is well on its way to rapidly advancing the remainder of its pipeline of three more highly prospective gold projects (Weepah, Spanish Moon, and Gilbert South) to a drill-ready stage in the coming months. The company anticipates to consecutively drill its portfolio of opportunities starting in Q4 2021 as it continues its goal of making Nevada's next major gold discovery."

Land Position
HSRP is located in Humboldt County Nevada, approximately 50 km northeast of the town of Winnemucca and 20 km northwest of the Getchell Trend. The property is comprised of over 3,500 hectares of highly prospective ground that has seen no exploration activity prior to being acquired by the Company in 2020.

HSRP – Getchell Analogous Structural Framework
The Eden Valley, Getchell, East Hot Springs Range (HSR), and East Osgood Mountains fault zones are subparallel sets of primary, northwest striking, reactivated normal faults that are part of a series of similar faults that form the Battle Mountain-Eureka Trend in northern Nevada. These long-lived faults served as feeders for gold-bearing fluids, as they were tectonically active in the Late-Eocene; a time period contemporaneous with formation of most Carlin-type gold deposits in Nevada. These fault sets are known at the Turquoise Ridge Complex to be primary controls on gold mineralization and analogous fault geometries have been identified at the HSRP in the recent acquisition of geophysics by Controlled Sources Audio-frequency Magnetotellurics (CSAMT). At the HSRP, the northeast oriented faults trend between the Otis and Eden target areas which have comparatively similar in geometry to the "TR-corridor" faults at the Getchell Trend, which extend between the Turquoise Ridge and Twin Creeks deposits. Lastly, both systems have a shallowly dipping thrust fault, which was recently interpreted by the technical team from the CSAMT to exist at HSRP. This thrust fault served as a trap for gold-bearing fluids, where they reacted with receptive country rocks to form large gold deposits.

HSRP – Getchell Analogous Distal Au-Fingerprint
The distal geochemical fingerprint of the HSRP's Otis target and the Turquoise Ridge deposit are analogous. The main difference between the two systems is the slightly greater thickness of post-mineral cover at HSRP that obscures a geochemical signal at the updip exposures of the faults. At HSRP where the thrust fault, dikes and Eden Valley fault are exposed near the Otis drill target the geochemical signal of a Carlin-style gold system (0.4-2.8 g/t Au) is analogous to what is found at the Getchell Trend (~0.1-3 g/t Au).

"The opportunity at our Hot Springs Range Project is unique: its technical characteristics are quite remarkable and are highly analogous to the Getchell trend, which hosts some of Nevada's largest gold mines."

All scientific and technical information in this news release has been prepared by, or approved by Michael Dufresne, PGeo. Mr. Dufresne is a qualified person for the purposes of National Instrument 43-101 - Standards of Disclosure for Mineral Projects. 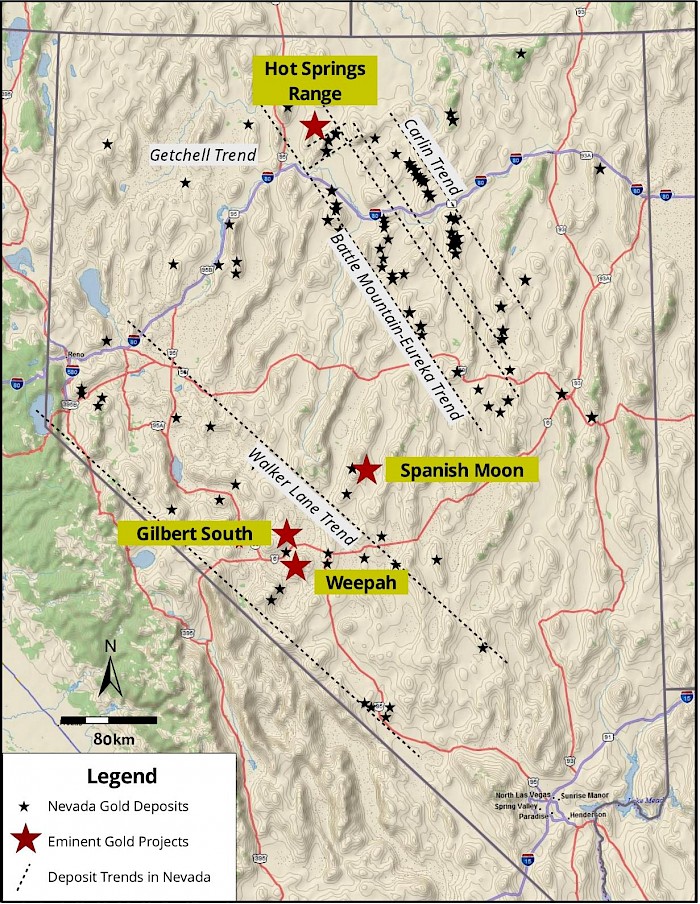 Figure 1. Plan view map of Nevada and the major gold trends and associated deposit locations. The Hot Springs Range Project is in the northern terminus of the Battle Mountain-Eureka Trend and parallels the Getchell Trend. 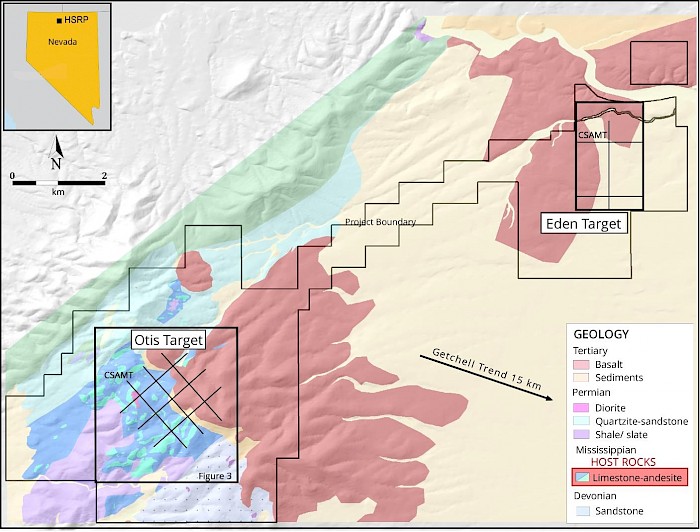 Figure 2. Plan view map of the HSRP. The CSAMT section lines are shown for both the Otis (Fig. 3) and Eden targets. 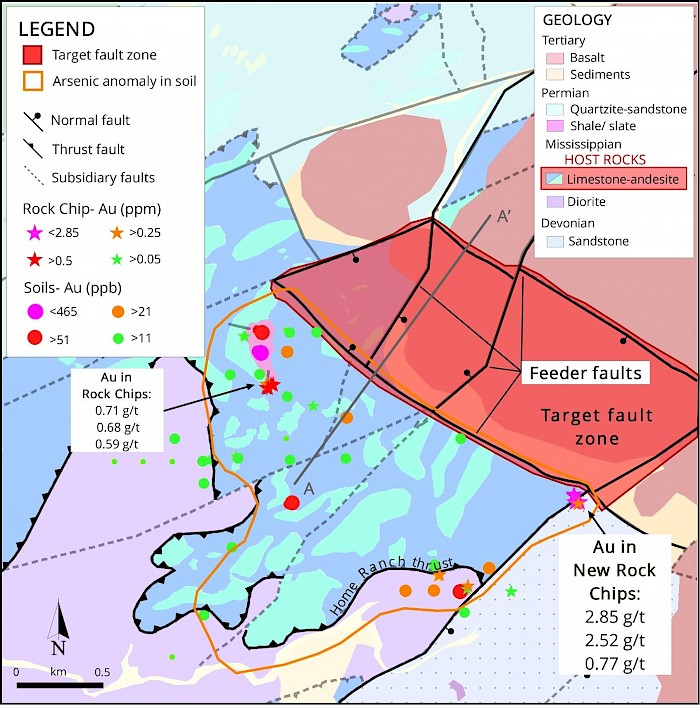 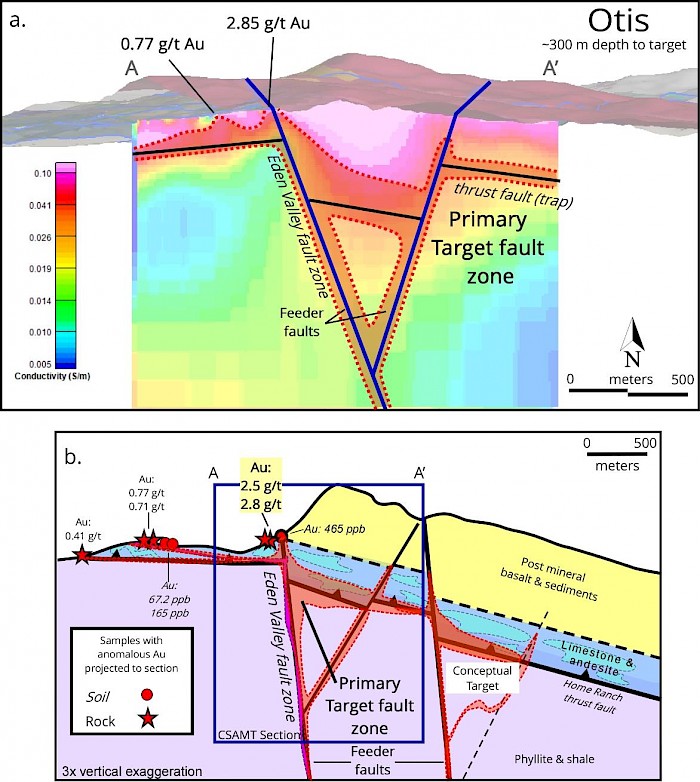 Figure 4. a) Oblique view of the CSAMT section in a Leapfrog model. Note the steeply dipping Eden Valley faults and intersecting NE oriented faults, along with the shallow thrust fault. The mapped trace of the thrust fault corresponds to where it is imaged by CSAMT. b) Conceptual cross section of the Otis target based on surface mapping in 2020 showing the hypothesized fault geometry at depth as well as soil (ppb) and rock chip (g/t) assay results projected to the section. The CSAMT data supports the existence of the conceptual faults at the Otis target. 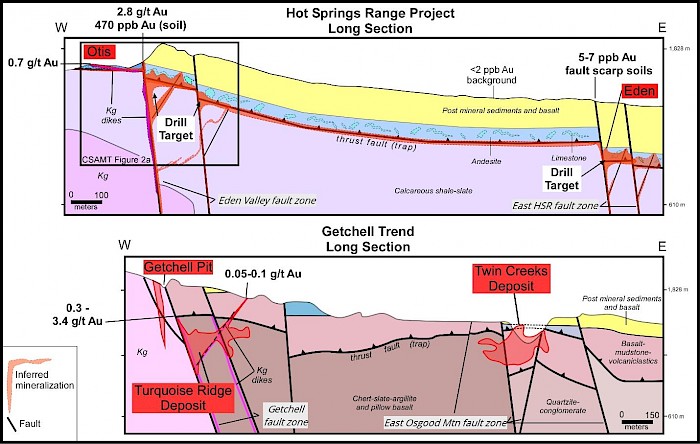 Figure 5. Long sections of the HSRP and Getchell Trend extending ~10 km from west to east. These comparative cross-sections show the similar fault geometry between the HSRP and the location of large gold deposits at the Getchell Trend.

Eminent Gold is a gold exploration company focused on creating shareholder value through the exploration and discovery of world-class gold deposits in Nevada. Its multidisciplinary team has had multiple successes in gold discoveries and brings expertise and new ideas to the Great Basin. The Company's exploration assets in the Great Basin include: Hot Springs Range Project, Weepah, Gilbert South, and Spanish Moon District.

This news release contains certain statements that may be deemed "forward-looking statements" with respect to the Company within the meaning of applicable securities laws. Forward-looking statements are statements that are not historical facts and are generally, but not always, identified by the words "expects", "plans", "anticipates", "believes", "intends", "estimates", "projects", "potential" and similar expressions, or that events or conditions "will", "would", "may", "could" or "should" occur. Forward-looking statements made in this news release include the Company's exploration plans for the Hot Springs Range property, the Company's expectations for the potential of the Hot Springs Range property, and the Company's plans for drilling on the Hot Springs Range Project. Although Eminent Gold Corp. believes the expectations expressed in such forward-looking statements are based on reasonable assumptions, including the assumption that records and reports of historical work on the Hot Springs Range property are accurate and correct, such statements are not guarantees of future performance, are subject to risks and uncertainties, and actual results or realities may differ materially from those in the forward-looking statements. Such material risks and uncertainties include, but are not limited to, the Company's ability to raise sufficient capital to fund its obligations under its property agreements going forward, to maintain its mineral tenures and concessions in good standing, to explore and develop the Company's projects or its other projects, to repay its debt and for general working capital purposes; changes in economic conditions or financial markets; the inherent hazards associates with mineral exploration and mining operations, future prices of gold, silver and other metals, changes in general economic conditions, accuracy of mineral resource and reserve estimates, the ability of the Company to obtain the necessary permits and consents required to explore, drill and develop the Company's projects and if obtained, to obtain such permits and consents in a timely fashion relative to the Company's plans and business objectives for the projects; the general ability of the Company to monetize its mineral resources; and changes in environmental and other laws or regulations that could have an impact on the Company's operations, compliance with environmental laws and regulations, aboriginal title claims and rights to consultation and accommodation, dependence on key management personnel and general competition in the mining industry. Forward-looking statements are based on the reasonable beliefs, estimates and opinions of the Company's management on the date the statements are made. Except as required by law, the Company undertakes no obligation to update these forward looking statements in the event that management's beliefs, estimates or opinions, or other factors, should change.