Eminent Gold Corp. (TSX-V: EMNT) (the “Company” or “Eminent”) is pleased to announce the results from its Phase 1 surface geochemistry and mapping programs from its Weepah Project, located 30 kilometers (km) southwest of Tonopah (Figure 1). The Company’s technical team mapped previously unrecognized multi - kilometer length faults that were coincident with gold and arsenic geochemical anomalies and define the boundaries of the post mineralization cover sequence. These fault zones will be the focus of the Company’s targeting efforts (Figure 2).  In addition, two occurrences of mineralization have been defined to the north and west of the historical Weepah pit that gave rock chip values up to 3.5 g/t gold and soil values up to 328 ppb gold (Figure 2).

"We are pleased to announce that Phase 1 results reveal the existence of new targets at Weepah. This opens up an entirely new mineralizing scenario for us to test. We look forward to a steady stream of results from the project, which we expect will provide additional support for this model in preparation for drilling.”

Land Position
Weepah is located in Esmeralda County Nevada, approximately 32 km southwest of the town of Tonopah. Eminent’s property is comprised of over 1,250 hectares of highly prospective ground that has seen limited modern exploration.

Phase 1: Surface Field Work - Complete
The Company took 1,665 soil samples from colluvium and 443 pediment soil samples, at 50-meter by 200-meter spacing as well as 295 rock samples.  Through mapping and sampling the entire property the Company’s technical team identified two primary fault zones that indicate mineralization outside of the historic Weepah pit. Importantly these two fault zones bound an area of pediment (cover) immediately south of the Weepah pit. Both gold and arsenic show stronger anomalies in pediment soil samples along these fault zones. Arsenic is one of the best pathfinder elements for gold mineralization and is particularly effective in revealing mineralization under post-mineral cover. It is believed by the Company’s technical team that historic drilling, which focused on a trend subparallel to Weepah, missed the opportunity to intercept stronger mineralization that correlates with these newly identified faults. This is illustrated by historic drill intercepts shown in Figure 2, which are located at the edge of the new mineralized fault zones.

Rock and soil results to the north and west of the historic Weepah pit have also shown promising surface gold and arsenic geochemistry suggesting potential in these areas as well which can be further explored in the future. For a full technical explanation of the sampling, mapping, and structural modeling, please see the Weepah Project on the Company’s website.
https://eminentgoldcorp.com/projects/weepah/

Phase II: Legacy Drilling and Geophysics Reprocessing – In progress
The Company has logged and sampled seven historic core holes, many portions of which were previously unsampled (assays are pending). In addition, the Company’s technical team has re-logged rock chips from 29 RC holes as well as compiled data from 120 previously drilled holes into a 3-D database. A geophysical contractor is processing 14 kilometers of CSAMT data that had been obtained by a previous operator but not fully processed. When Phase II is complete, the Company will compile all results, including the new core assays in its 3D database to facilitate future drill targeting.

All scientific and technical information in this news release has been prepared by, or approved by Justin Milliard, PGeo.  Mr. Milliard is a qualified person for the purposes of National Instrument 43-101 - Standards of Disclosure for Mineral Projects.  Assays for soil and rock chip samples were performed at ALS Chemex Laboratories and checked for accuracy using both internal lab standards and standards inserted by the Company. 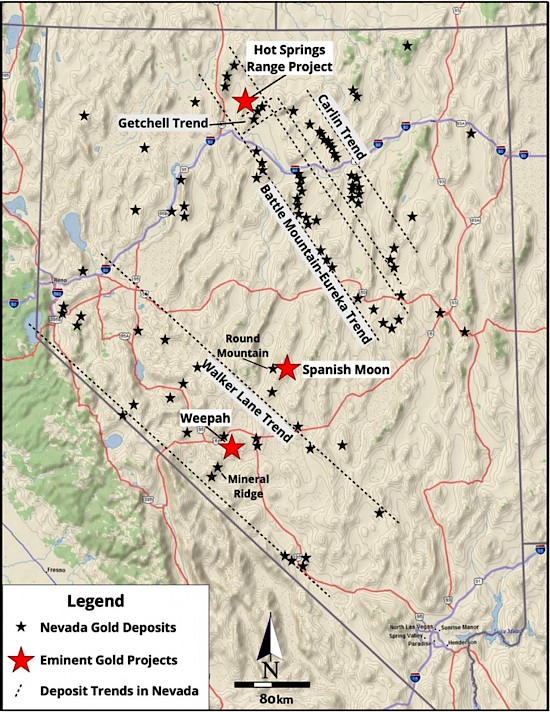 Figure 1. Plan view map of Nevada and the major gold trends and associated deposit locations. The Weepah Project is in the central portion of the Walker Lane Trend. 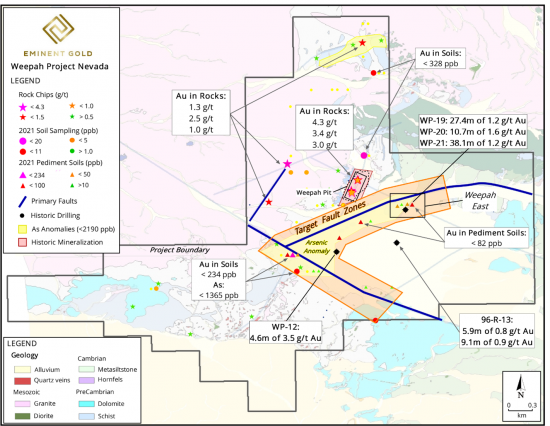 Figure 2. Plan view map of the Weepah region with select soil results, and gold-in-rock chip results from Eminent ’s 2021 phase I sampling. Bedrock geology modified from Sonderman (1971) and revised through mapping, sampling and data compilation by the Company’s technical team. The only previously mapped fault in this area was the Weepah Shear Zone where the Weepah pit exists today. Newly identified faults and fault intersections revealed by mapping and geochemistry provide new, untested drill targets and expand the area of potential mineralization away from the historic Weepah pit. Select drillholes in the pediment are shown for reference. For additional information as to other historic drillholes, see the published 43-101 for the property from Ely Gold and Minerals Corp. (Price, 2016). 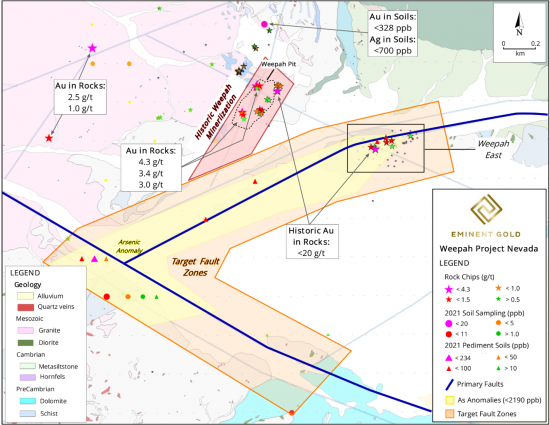 Figure 3. Plan map of the main Weepah pit and Weepah pediment area showing arsenic-in-pediment soil geochemistry and mapped faults. Soil geochemical anomalies are evidence for near surface mineralization just under the cover sequence that is associated with the recently mapped ENE and WNW pediment bounding faults. The historic Weepah pit and zone of mineralization also yielded strong gold values indicating potential remaining in the historic area of the project.