Vancouver, Canada, October 17, 2022 – Eminent Gold Corp. (TSX-V: EMNT) (OTCQB: EMGDF) (the "Company" or “Eminent”) is pleased to announce that it has begun a geophysics survey at its Meadow Canyon target (Fig. 1 and Fig. 2) after receiving approval from the U.S. National Forest Service (“USFS”).  Additionally, positive results from several infill soil samples further support the concept of a buried mineralizing system at Meadow Canyon. A geophysical program designed to reveal the architecture of obscured faults to determine the structure’s potential to host gold mineralization has launched with results expected before year end.

“The geophysics at Meadow Canyon will be a key step in determining the strength of our thesis that we could have a potential epithermal system analogous to the 23 Moz Round Mountain mine1,2 13km away on the other side of the mountain range. We look forward to working with the USFS personnel through our Plan of Operations and continue to maintain our stewardship to the environment we work in.”

“The Meadow Canyon target has the potential to develop into a new major gold target in Nevada. Early discrete indications through geochemistry results on surface and its proximity to the Round Mountain mine indicate the potential for an obscured mineralized gold system to be present. The geophysics will be the remaining study required to identify drill targets prior to completion of the Plan of Operations and drilling.”

All scientific and technical information in this news release has been prepared by, or approved by Justin Milliard, PGeo. Mr. Milliard is Vice President of Exploration for Eminent Gold Corp. and is a qualified person for the purposes of National Instrument 43-101 – Standards of Disclosure for Mineral Project. 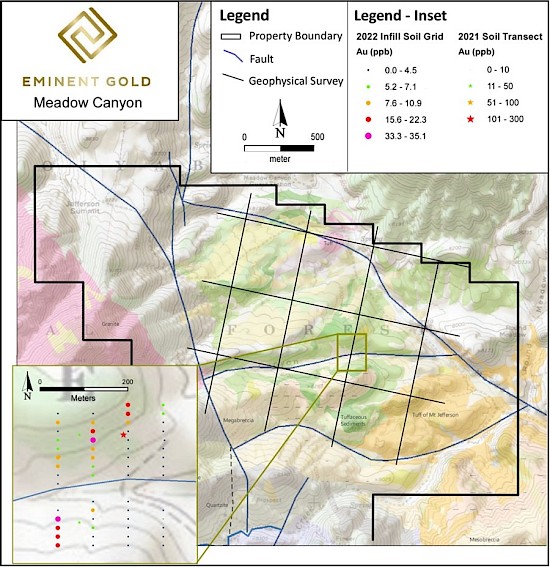