Vancouver, Canada, January 25, 2023 – Eminent Gold Corp. (TSX-V: EMNT) (OTCQB: EMGDF) (the "Company" or “Eminent”) is pleased to announce that it has completed a geophysics survey at its Meadow Canyon target (Fig. 1 and Fig. 2). Results identify a conductivity anomaly that occurs coincident at the intersection of inferred feeder faults at a caldera margin, which is analogous to mineralization at the 23 Moz Round Mountain mine1,2, 13 km to the west of Meadow Canyon. Our ongoing Plan of Operations will prioritize the exciting targets confirmed by this survey.

“The geophysics results at Meadow Canyon confirmed our technical team’s thesis of a strong conductivity target at the structural intersection of the inferred feeder faults that our 2021 pathfinder soil geochemistry vectored toward. This evidence strengthens our resolve to push forward with the permitting process and continue our collaboration with the USFS and stakeholders to permit drilling at Meadow Canyon as we are another step closer to determining if we have a system analogous to the 23 Moz Round Mountain mine.”

“The potential of Meadow Canyon is a unique large scale opportunity in that it has never been explored while much of Nevada has seen so much exploration and delivered some of the world’s biggest gold mines. The target has strengthened with each geologic test we completed and all surface indicators support the idea that an obscured mineral system could be present. Our geophysics now gives us clear subsurface anomalies that correspond to our previous structural targets. The remaining step is to complete the permitting process and drill test the targets.”

All scientific and technical information in this news release has been prepared by, or approved by Justin Milliard, PGeo. Mr. Milliard is Project Geologist for Eminent Gold Corp. and is a qualified person for the purposes of National Instrument 43-101 – Standards of Disclosure for Mineral Project. 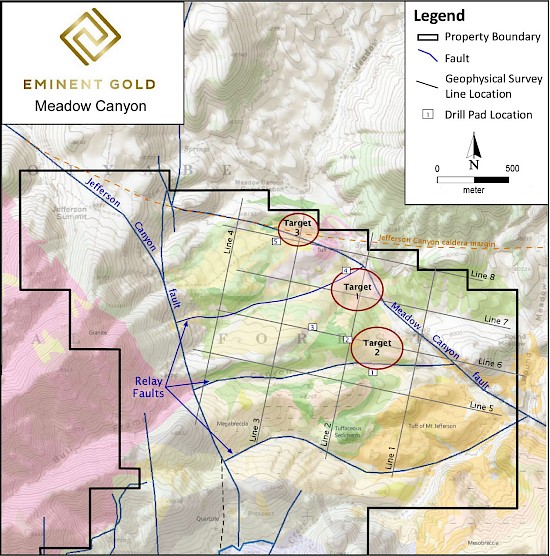 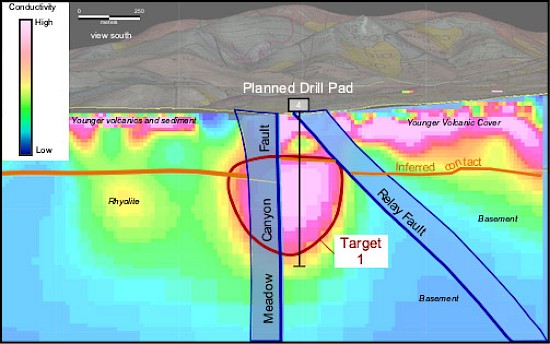 Figure 3. Cross-section view to the south of CSAMT line 7 showing modeled faults (as planes), stratigraphic contacts, proposed drill location and highest priority target. The original Meadow Canyon conceptual target was the intersection of the Meadow Creek fault and the relay fault. The strongest conductivity anomaly (red polygon) occurs at this structural intersection and is interpreted to reflect argillic alteration of rhyolite. 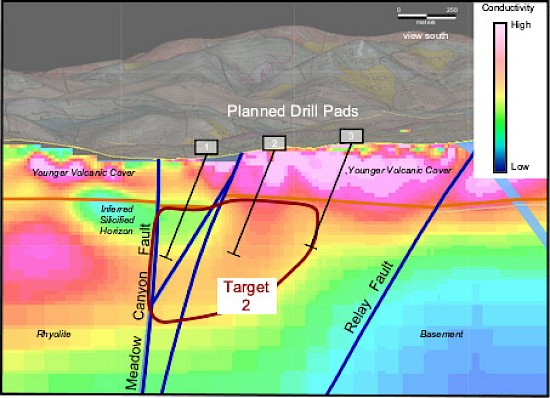 Figure 4. Cross-section view south of CSAMT line 6 showing faults, contacts, proposed pad locations and the second highest priority target. The Meadow Canyon fault is one of the major inferred feeder faults and potential sources for the soil geochemistry anomaly identified in the Flower area. The conductivity anomaly extending across the fault is interpreted to reflect argillic alteration of rhyolite with an overlying silicified body. 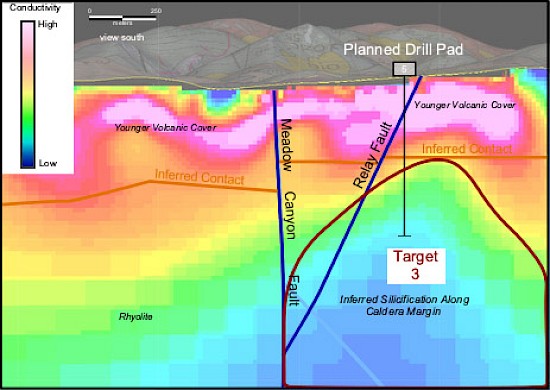 Figure 5. Cross-section view south of CSAMT line 8 that is coincident with the caldera margin, showing faults, stratigraphic contacts, proposed drilling location and the third priority target. All known gold/silver deposits associated with the Jefferson Canyon caldera appear associated with this fault and occur in the immediate proximity on either the hanging or footwall. Resistivity anomaly is inferred to represent silicification and potential veining along the caldera margin structure.