Vancouver, Canada, January 20, 2022 – Eminent Gold Corp. (TSX-V: EMNT) (OTCQB: EMGDF) (the "Company" or “Eminent”) is excited to announce positive results of its ongoing work as well as the doubling of its land position at its Spanish Moon District project (“Spanish Moon”). Spanish Moon is located approximately 13 km SE of the active Round Mountain Mine with over 20 million ounces of gold produced (Patterson, 2020; Kinross, 2021) (Figure 1 & 2). Follow up sampling of the Antone Canyon Gold Target discovered multiple outcrops containing up to 5 g/t gold.  The target is 2 km long, adjacent to our Barcelona Target to the southwest and remains open to the northeast (Figure 3).

The team staked an additional 1,060 hectares based on a developing target, called Meadow Canyon, that shares similar geologic characteristic to Round Mountain and other epithermal gold/silver systems in the region. Similar geologic features include, a 1km long arsenic anomaly >1,000ppm in the USGS geochemistry data, a structural setting of major fault linkages and proximity to calderas and intrusions. Additionally, Eminent’s 683 sample soil survey identified highly elevated pathfinder elements of arsenic (As), antimony (Sb), mercury (Hg) and thallium (TI) in the NE portion of the property adjacent to the new target (see Sep 22, 2021 News Release).

"The opportunity at Spanish Moon is significant and developing very well with multiple targets with some having many analogous features to Round Mountain and its location across the same intrusion only 13km away. Eminent is the first company to consolidate the claims that make up the Spanish Moon trend and applying modern targeting methods to the area.

We are very excited about the pending results from the preliminary Meadow Canyon soils survey and future geophysics program as we get ready to commence our inaugural drill programs across our 4 projects in the near term and throughout the year.”

The Antone Canyon Target is a gold and silver occurrence previously defined by past drilling which includes intercepts up to 13.5 m @ 7.6 g/t Au that have never been followed up on. Such intercepts occur within limestone and shale stratigraphy that is continuous across the project area. Phase 1 soil and rock sampling identified anomalous geochemistry extending both eastward and westward from the known Antone Canyon mineralization, increasing the target strike length to 2 km. Follow up mapping and sampling outside known mineralization identified multiple outcrops and prospects where the rock characteristics are analogous to Antone Canyon mineralization, with features of both low sulfidation epithermal (e.g., banded quartz veins) and sediment-hosted (e.g., sulfides in sedimentary rocks) gold and silver mineralization. The greatest density of mineralized samples and highest gold concentrations occur where the north-south oriented Hooper fault intersects the Barcelona thrust fault. This area of intersecting structures is modestly drilled and represents a primary target area for the Company.

The Meadow Canyon conceptual target was developed by combining components of regional structural interpretations, regional USGS geochemistry (Shawe, 2003), and cohesive arsenic-antimony-mercury-thallium anomaly from Eminent’s phase 1 rock and soil geochemistry programs (Sept 22, 2021 NR).  Most of the significant gold and silver mineral occurrences in the region are epithermal in nature and are associated with Tertiary-age volcano-magmatic activity and similar geochemical signatures. Additionally, the mineralization occurs where the following features are present: 1) within a >1,000 ppm As anomaly, 2) on or immediately adjacent to an Oligocene-age basin-bounding fault, 3) adjacent to a caldera.

The largest gold and silver system in the region is the world-class Round Mountain deposit (20 Moz of gold produced), which occurs on subsidiary structures linking the main caldera bounding faults. A similar structural setting exists at the Meadow Canyon Target where the Jefferson Canyon fault links to the Meadow Canyon fault. Multiple known epithermal vein systems occur along the strike of the Jefferson Canyon fault (i.e., Kinross’ Gold Hill deposit and Gold79’s Jefferson Canyon deposit) before the fault is obscured by post mineral cover where it links to the Meadow Canyon fault. Eminent’s 2021 soil sampling identified a large body of strongly correlated pathfinder elements indicative of a low sulfidation epithermal system (As, Hg, Sb and Tl) that coincides with intense silicification of basement rocks. The anomalous pathfinder geochemistry and alteration is open to the north where it becomes obscured by thin veneer of younger volcanic rocks. This region north of the Flower Target area was added to the Spanish Moon land package.

“The stream of results from Spanish Moon continue to indicate the project’s exciting potential to host both silver and gold mineralization via its numerous mineral systems. Even more, the phase 1 work completed in 2021 has yielded a brand-new conceptual target that mimics the geologic framework of the nearby Round Mountain deposit. We are anxious to build upon these developments with continued progress in the coming field season.”

The Company is collaborating with an industry leading permitting consultant agency to rapidly advance the project’s Plan of Operations permit with the US Forest Service. Permitting steps are being conducted along with planning a project wide geophysics program for the 2022 field season. The geophysics program will be designed to image the multiple types of mineralization in all three target areas of Spanish Moon; 1) intrusion related silver and gold at the Barcelona-Van Ness Target, 2) epithermal/sediment-hosted gold and silver at the Antone Canyon Target, 3) epithermal gold and silver at the Flower-Meadow Canyon Targets. Geophysics will enable our technical team to refine drill targets to be tested in the Fall of 2022.

All scientific and technical information in this news release has been prepared by, or approved by Justin Milliard, PGeo. Mr. Milliard is Project Geologist for Eminent and is a qualified person for the purposes of National Instrument 43-101 – Standards of Disclosure for Mineral Projects. Some of the information herein is provided by 1) historical reports that describe mining activities, geology and potential, published by the Nevada Bureau of Mines as well as historical field notes and reports recorded in the Nye County records, 2) publicly available reports from the United States Geologic Survey (USGS), 3) unpublished summary reports and news releases from Bullion River Resources describing exploration performed between 2003 and 2004.  It should be noted that the Company believes that all of these reports are reliable; however, the Company's qualified person has not conducted verification procedures and therefore has not confirmed them. 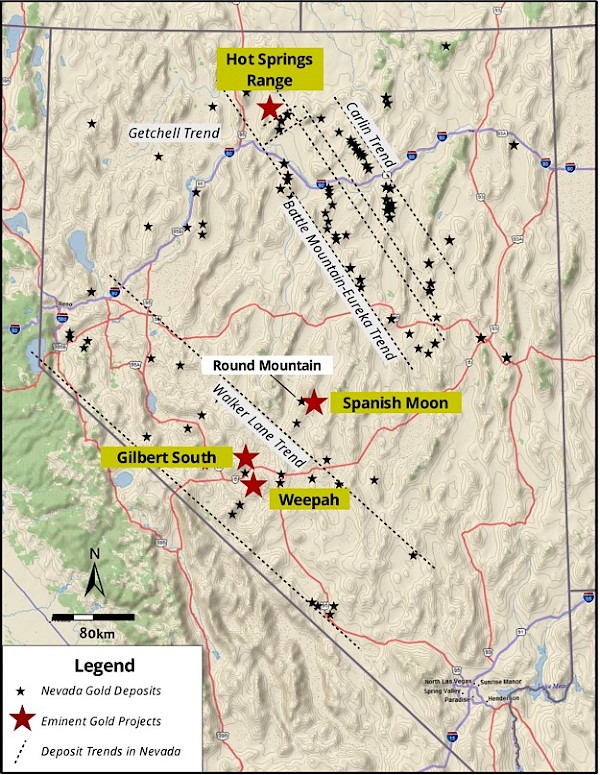 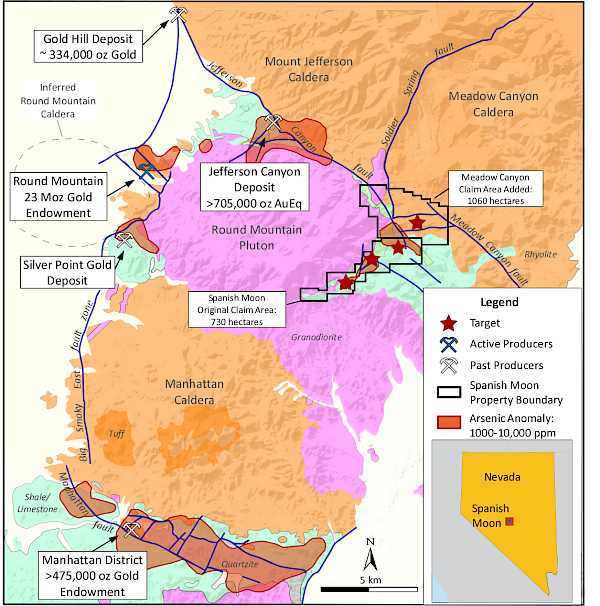 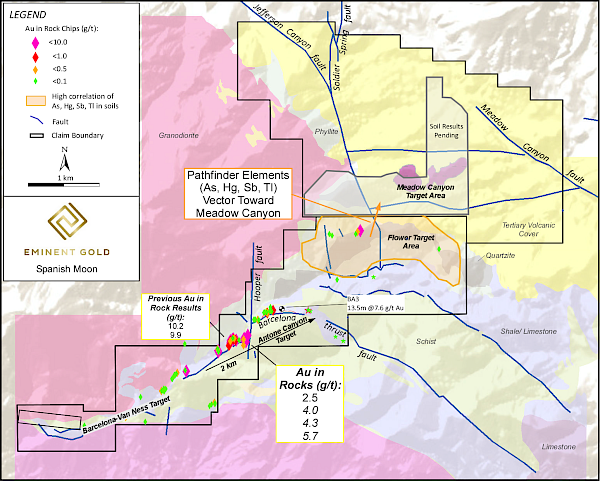