Vancouver, Canada, February 8, 2022 – Eminent Gold Corp. (TSX-V: EMNT) (OTCQB: EMGDF) (the "Company" or “Eminent”) is pleased to report excellent results from its recently completed geophysical campaign at the Gilbert South property within the Walker Lane Trend in Nevada.  (Figure 1). The Company had previously identified target areas associated with multi-kilometer length faults hosting gold-bearing veins that assayed from 3 g/t to 31 g/t gold (see October 21, 2021 NR). To further refine targeting along these gold bearing fault zones, a ground based CSAMT (Controlled Source Audio-frequency Magnetotellurics) survey was conducted over the property to better understand their geometry. The results of the survey clearly demonstrate that gold rich veins hosted within mapped fault zones have a strong correlation with conductive responses within host rocks with a high resistivity signature. The company has identified three primary target zones based on the results of the geophysical (CSAMT) survey, rock chip and soil assays, and an ammonium anomaly that coincide with mapped gold bearing vein systems (Figure 2, Table 1).

Paul Sun, President and CEO of the Company commented:
"We are very pleased with the results from the geophysical survey which support our technical team’s target model and strengthens our belief that Gilbert South contains a robust gold system.

Exploration target areas initially identified by surface samples and mapping have been corroborated by the geophysical data. The geophysical conductive anomalies commonly correlate with alteration of the host rock to clay minerals produced by the same fluids that formed veins; a common association in bonanza gold targets and one that Eminent geologists mapped on the surface at Gilbert South. The depth of these anomalies, projected from surface, indicates significant size of target zones along these deep-seated fluid conduits (Figure 3, 4). The company plans to prioritize and permit drill targets at Pretty Boy, Bighorn, and the East Bound areas in preparation for a drill program planned in Q3 of this year.

“Gilbert South is a premier Nevada exploration opportunity as many other bonanza vein districts in Nevada have been well tested, modern exploration has barely scratched the surface at Gilbert South. We have taken numerous samples exceeding 10 g/t over meter-plus widths and are also encouraged by the amount of visible gold we are seeing. The geophysics indicates that these structures could have feeder targets supplying the gold on surface – the feeder targets extend kilometers deep and thus provide the potential of thick bonanza zones at depth. We are very excited to refine our targets further and to drill them this year.”

From west to east across the central portion of the Property there are three primary structures that form the heart of outlined exploration targets. On the western portion of the Property is the 2.5 km long Bighorn target, characterized by a subvertical, east-dipping, conductive anomaly that cuts a 500-meter-thick section of resistive basement. This anomaly suggests a deep-seated structure with up to a 250-meter-wide halo of alteration. The 2.5 km long Pretty Boy target is characterized by numerous subtle breaks in the resistive basement. These breaks in resistivity could indicate the mapped, 0.75 km wide stockwork vein zone cuts the basement rock at depth, and coalesces into a single feeder structure. Farthest to the east is the 2.5 km long EB target which is characterized as a resistivity break that is steeply east-dipping, comparable to the Bighorn target in scale. Branching off the EB fault is a subsidiary west-dipping fault and epithermal vein from which a 30.6 g/t Au sample was taken. Beneath the Pretty Boy and EB targets is a large conductive anomaly that may represent carbonaceous basement rocks which are thought to be a potential source of ammonium-bearing clays found at the surface. Ammonium-bearing clay alteration is indicative of the fertile, deep-seated nature of the target structures. All three structures are prime targets for bonanza epithermal veins.

Compilation of all legacy and new data into a Leapfrog geologic model is allowing the technical team to refine drill targets on the Bighorn, Pretty Boy and EB structures. By integrating multiple lines of evidence; surface geochemistry, geology, spectroscopy and now geophysics, the technical team is identifying discrete vein targets both along strike and down dip of our multiple 2.5 km-long structural targets.  Targets will be drill tested in Q3 of 2022.

All scientific and technical information in this news release has been prepared by, or approved by Justin Milliard, PGeo. Mr. Milliard is Project Geologist for Eminent and is a qualified person for the purposes of National Instrument 43-101 - Standards of Disclosure for Mineral Projects. 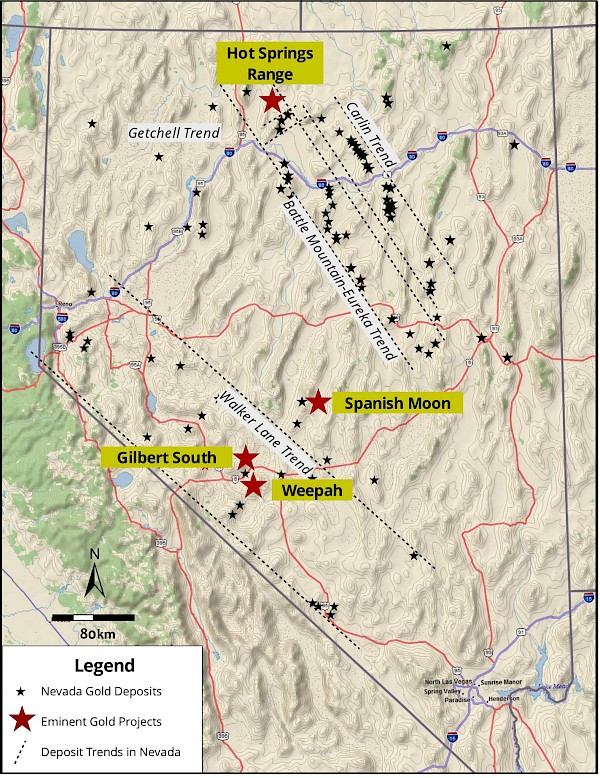 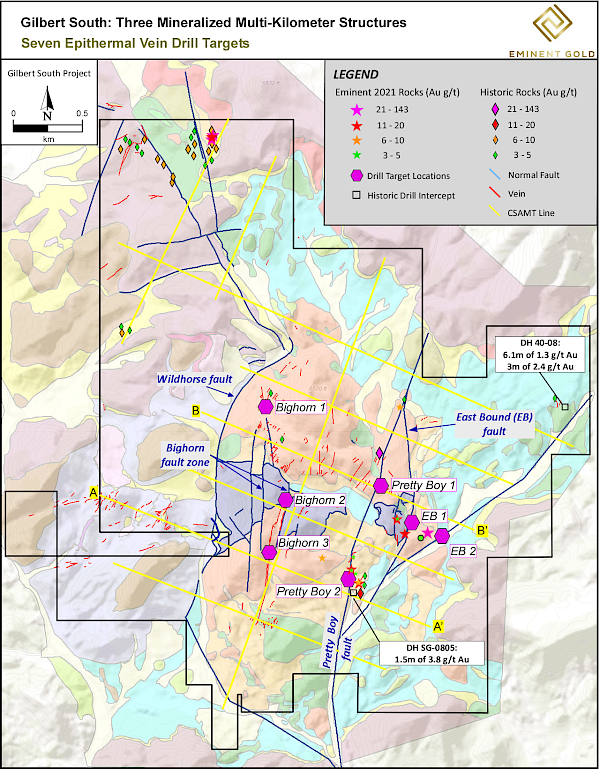 Table 1. Compilation of key features indicative of the presence of epithermal veins at depth considered for each target. 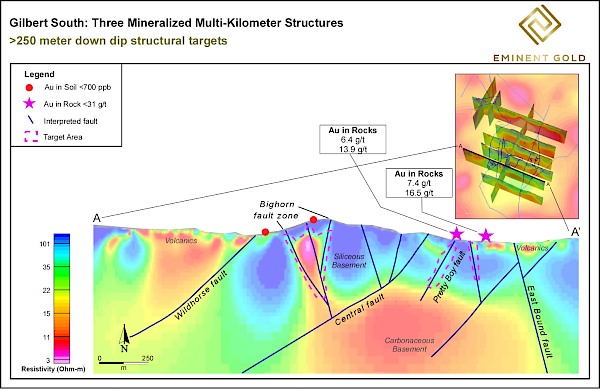 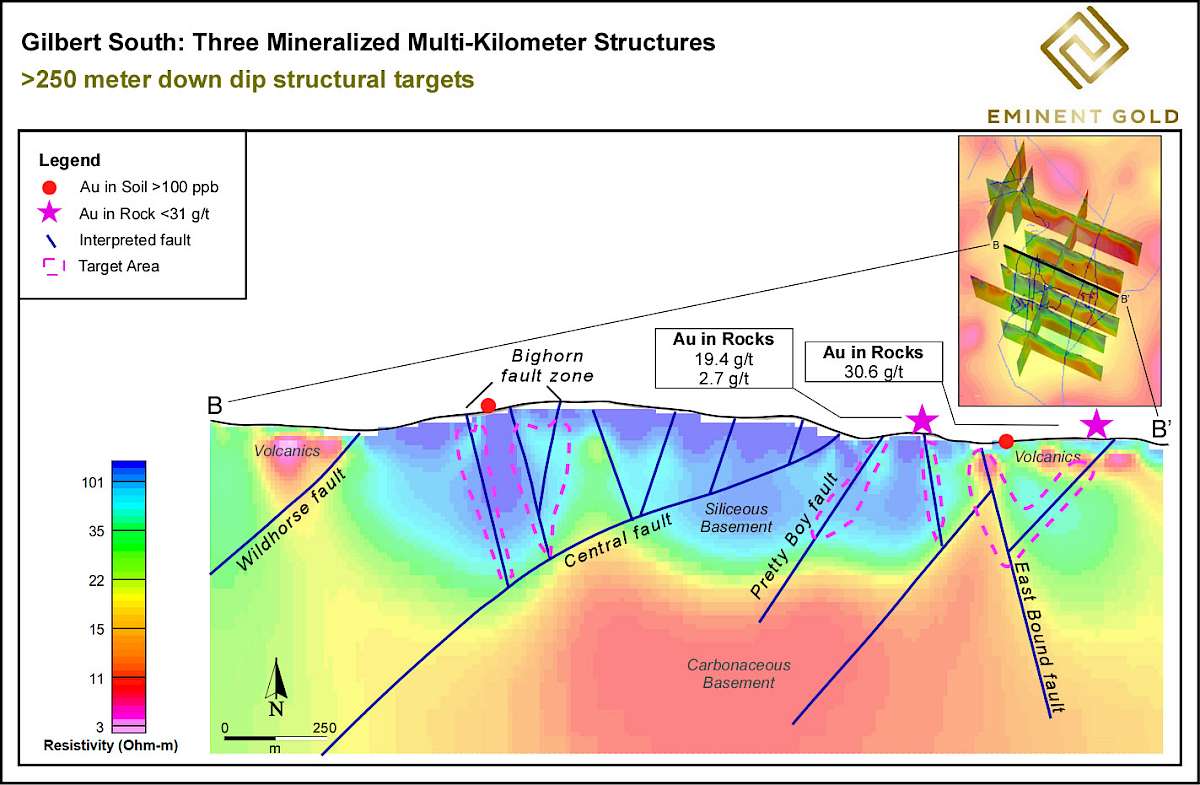 This news release contains certain statements that may be deemed “forward-looking statements” with respect to the Company within the meaning of applicable securities laws. Forward-looking statements are statements that are not historical facts and are generally, but not always, identified by the words “expects”, “plans”, “anticipates”, “believes”, “intends”, “estimates”, “projects”, “potential” and similar expressions, or that events or conditions “will”, “would”, “may”, “could” or “should” occur.  Forward-looking statements made in this news release include the Company’s exploration plans for the Gilbert South property, the Company’s expectations for the potential of the Gilbert South property, the Company’s plans for generating drill targets based on current information and the generation of information from the proposed geophysical survey. Although Eminent Gold Corp. believes the expectations expressed in such forward-looking statements are based on reasonable assumptions, including the assumption that records and reports of historical work on the Gilbert South property are accurate and correct and that the sampling results are indicative of the target areas as a whole, such statements are not guarantees of future performance, are subject to risks and uncertainties, and actual results or realities may differ materially from those in the forward-looking statements. Such material risks and uncertainties include, but are not limited to, the Company’s ability to raise sufficient capital to fund its obligations under its property agreements going forward, to maintain its mineral tenures and concessions in good standing, the Company’s assumptions may prove incorrect; changes in economic conditions or financial markets; the inherent hazards associated with mineral exploration and mining operations, future prices of gold, silver and other metals, changes in general economic conditions, accuracy of mineral resource and reserve estimates, the ability of the Company to obtain the necessary permits and consents required to explore, drill and develop the Company’s projects and if obtained, to obtain such permits and consents in a timely fashion relative to the Company’s plans and business objectives for the projects; the general ability of the Company to monetize its mineral resources; adverse weather conditions may affect the Company’s ability to conduct work programs, availability of qualified personnel, changes in environmental and other laws or regulations that could have an impact on the Company’s operations, compliance with environmental laws and regulations, dependence on key management personnel and general competition in the mining industry. Forward-looking statements are based on the reasonable beliefs, estimates and opinions of the Company’s management on the date the statements are made. Except as required by law, the Company undertakes no obligation to update these forward-looking statements in the event that management’s beliefs, estimates or opinions, or other factors, should change.