Vancouver, Canada, April 27, 2022 – Eminent Gold Corp. (TSX-V: EMNT) (OTCQB: EMGDF) (the "Company" or “Eminent”) is pleased to announce that soil sampling results from orientation studies confirms the existence of a Round Mountain style - epithermal target at the Meadow Canyon area of the Company’s Spanish Moon property (Figure 1). The Meadow Canyon target area is largely covered by post mineral volcanic cover with the soil results containing both gold and associated pathfinder elements that are elevated several times above background values, demonstrating the potential for a large epithermal mineralized system under cover (Figure 2). The Company considers these limited initial test soil lines an important step in the development of a Round Mountain analogue and will expand the survey in conjunction with structural mapping to develop drill targets (Figure 3).

"It is exciting to see a conceptual model come to fruition as a potential target by results, which again speaks to the strength of our technical team. These new results support the team’s model of a potential epithermal system at the Meadow Canyon target. We are seeing the geochemical indications of a Round Mountain type mineral system at Spanish Moon that has never been explored. This is becoming a substantial gold exploration target and we are anxious to expand on these results with continued soil sampling and geophysical surveys.”

Mr. Sun also stated: “We are also happy to announce that we are bringing on an investor relations manager in an effort to further increase Eminent’s opportunities and visibility to the investing public.”

Eminent’s technical team did not expect to find any gold in soils values above 10 ppb (background is 0.01 to 1 ppb) as a result of the post mineral cover at Meadow Canyon. Given that the soil survey returned multiple samples >10 ppb and up to 232 ppb so far, the technical team believes that there is the potential for a significant gold system underneath the volcanic cover. In addition, three out of five of the samples occurred immediately adjacent to one of the two targeted feeder faults suggesting where gold leakage from where potential gold mineralization would occur demonstrating the importance of structures to identifying a mineralized system.

Meadow Canyon as a Round Mountain Analogue:

The Meadow Canyon prospect has the following features similar to the Oligocene-age Round Mountain deposit: 1) linking normal faults, 2) spatially located at a caldera margin and 3) >1,000 ppm arsenic geochemical anomaly. The spatial correlation of these features indicate the NE corner of the Spanish Moon property may be the margin of a low sulphidation epithermal system. Previous soil results at the Flower target, in conjunction with <1.1 g/t Au in rocks located along north-south oriented faults spurred staking of the Meadow Canyon area (Jan. 20, 2022 NR) and the initial soil results from Meadow Canyon validate the lower sulphidation epithermal model the Company is pursuing.

“The strong geochemical signal present in the post-mineral cover at Meadow Canyon is significant. The results are indicating, through the volcanic cover, that the conceptual Meadow Canyon target could truly be a slightly covered Round Mountain type deposit.”

Surficial volcanic rocks within Meadow Canyon display little visible alteration however, the same geochemically anomaly in soil persists northward along a fault system that controlled the eastern margin of the Meadow Canyon caldera (i.e., Soldier Springs fault). This fault system has remained active as a basin-bounding normal fault and the associated earthquakes and fault ruptures are inferred to cause the vertical ascent of ground waters. Ascending ground waters scavenge elements from the underlying bedrock and associated mineralization, then transport this geochemically anomalous groundwater to the surface where ions are deposited on unaltered rocks proximal to permeable faults. Discovery of a suite of pathfinder elements that correlate within Meadow Canyon, through the post-mineral cover, is highly encouraging in this conceptual target.

The preliminary soil survey consisted of multiple north-south and east-west oriented lines of soil samples spaced at 100 m, obliquely crossing the targeted structures to test if they are pathways for ascending geochemically anomalous groundwaters. Initial soil results within the Flower target indicated a pathfinder geochemistry expected on the periphery of an epithermal system (see September 22, 2021 News Release). Initial results vectored northward to the Meadow Canyon target where post-mineral volcanic cover up to 150 m thick obscures surface expression of the target. Volcanic cover consists of Late-Oligocene to Early-Miocene volcanic material that post-date or potentially overlap the timing of mineralization at Round Mountain and adjacent gold deposits (i.e., Gold Hill and Jefferson Canyon). The Meadow Canyon target occurs in a geologic setting analogous to Round Mountain, at a normal fault linkage between two caldera bounding normal faults (i.e., Jefferson Canyon and Meadow Canyon faults that form southern bounds to their respective calderas) and is coincident with a >1,000 ppm arsenic anomaly (Shawe, 2003). The correlation of normal fault linkages, caldera margins and an arsenic anomaly, correspond to all deposits of significance in the southern Toquima Range (i.e., Round Mountain, Manhattan, and Jefferson Canyon) but has not been explored at Meadow Canyon.

The structural block defining the Meadow Canyon target has never been tested. The Soldier Springs fault is the reactivated western margin of the Meadow Canyon caldera and has regularly ruptured up to present times. The ongoing fault ruptures are inferred to influence the vertical ascent of groundwater carrying pathfinder geochemistry upwards through post-mineral cover. Scavenging and transport of pathfinder elements to the surface from mineralized rocks at depth would have occurred along these faults, resulting in the anomalies presented here. Positive results of the preliminary soils demonstrate that correlative arsenic, antimony, mercury, thallium, and gold extends from the Flower target in the south to the northern limit of the Meadow Canyon target. Several rock samples with <1.2 g/t gold are interpreted to represent the distal expression of the low sulphidation epithermal target at Meadow Canyon.

Positive results from this preliminary soil survey validate the team’s conceptual model and the need to complete a soil grid across the entire Meadow Canyon claim block in concert with a geophysical survey. An isometric soil grid will provide clarity as to where the most reasonable buried target exists in the Meadow Canyon area. A geophysical survey will define the thickness of the volcanic cover sequence as well as the architecture of the inferred linkage faults.

Immediate next steps include completing the soil grid at Meadow Canyon and continuing the permitting process for a Plan of Operations at Spanish Moon. The Company is collaborating with an industry leading permitting agency to advance the Plan of Operations permit with the US Forest Service as quickly as possible. Permitting steps are being conducted in conjunction with planning a project wide geophysics program for the 2022 field season. The geophysics program will be designed to image the multiple types of mineralization in all three target areas of Spanish Moon: 1) intrusion related silver and gold at the Barcelona target, 2) epithermal/sediment-hosted gold and silver at the Antone Canyon targets, 3) epithermal gold and silver at the Flower-Meadow Canyon targets. Geophysics will enable our technical team to outline the most prospective drill targets. Once the Plan of Operations and subsequent permits are obtained, optimal targets will be well defined and ready to move forward with drilling.

The Company welcomes Nemanja “Nemo” Brcan as the Company’s investor relations manager. Mr. Brcan will be working in house with the Company, and will be responsible for managing the Company’s shareholder outreach and responding to investor queries.  In connection with Mr. Brcan’s appointment, the Company has granted 150,000 incentive stock options to Mr. Brcan at $0.65 per share, exercisable for a period of 5 years. The stock options vest quarterly over a twelve month period, and are subject to the terms of the Company’s Stock Option Plan and any necessary regulatory approvals.

All scientific and technical information in this news release has been prepared by, or approved by Justin Milliard, PGeo. Mr. Milliard is Project Geologist for Eminent and is a qualified person for the purposes of National Instrument 43-101 – Standards of Disclosure for Mineral Projects. Some of the information herein is provided by 1) historical reports that describe mining activities, geology and potential, published by the Nevada Bureau of Mines as well as historical field notes and reports recorded in the Nye County records, 2) publicly available reports from the United States Geologic Survey (USGS), 3) unpublished summary reports and news releases from Bullion River Resources describing exploration performed between 2003 and 2004.  It should be noted that the Company believes that all of these reports are reliable; however, the Company's qualified person has not conducted verification procedures and therefore has not confirmed them. 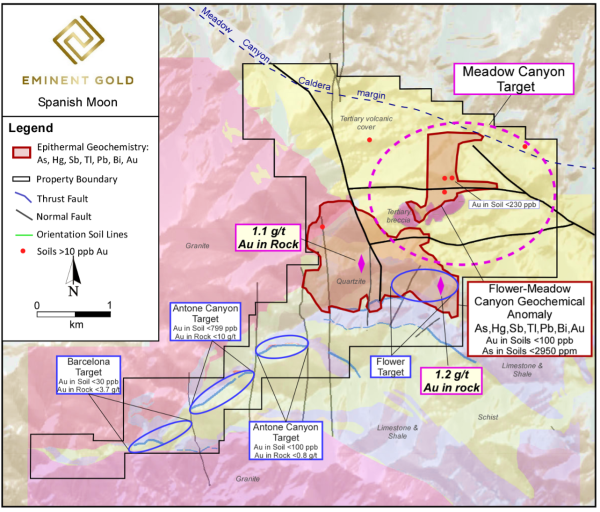 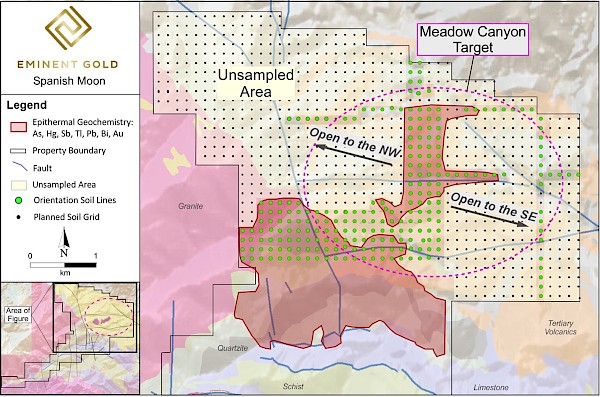 Figure 3. Zoomed in area of soil sampling grid at Meadow Canyon. Green points are those sampled during the orientation survey. Black points are unsampled points remaining in the grid to cover the Meadow Canyon area. Areas of correlative geochemistry, indicative of epithermal mineralization, shown by red polygons. Potential for additional mineralized area is open to the northwest and southeast of the orientation soil lines previously sampled. Inset map shows area of figure relative to the greater Spanish Moon District property.