Vancouver, BC - Eminent Gold Corp. (TSX-V: EMNT) (the “Company”) is pleased to announce that Phase 1 geochemical and mapping results of its Hot Spring Range Project (HSRP) located 15 km northwest of the Getchell Trend (42.5Moz Au endowment), demonstrates proof of concept that a Getchell Trend analogous Carlin-type gold system exists on the Property (Figure 1). The structural framework and host rock lithologies at HSRP have never before been explored (Figure 2). Now that the Company has identified targets associated with geochemical anomalies the next step is to confirm targets through ground geophysical surveys followed by drill testing.

"The results of our geochemical data confirms the validity of our original concept that our project represents several features analogous to the world renowned Getchell Trend. This concept is bolstered by the strength of the geochemical anomalies and reports from our technical team about Carlin-type mineralization in this area that has never been tested before.

We look forward to completing geophysics on the Eden and Otis targets which will prepare us for HSRP’s first drill program, once complete.”

HSRP is located in Humboldt County Nevada, approximately 50 kilometers (km) northeast of the town of Winnemucca, NV and 20 km northwest of Nevada Gold Mine’s Turquoise Ridge mine complex, which together with Twin Creeks forms the Getchell Trend (42.5M oz in gold endowment1). The HSRP is comprised of over 3,200 hectares of highly prospective ground that has seen no exploration activity prior to being acquired by Eminent Gold in 2020.

The Company took 1,312 soil samples at 125-meter centers and 157 rock samples at the Otis target, and 79 pediment soil samples at the Eden target to test the conceptual model of a Carlin-type hydrothermal gold system analogous to the Getchell Trend occurring in the Hot Springs Range. Additionally, geologic mapping by the Company’s experienced technical team confirmed the presence of multiple key characteristics of a Carlin-type system a) a prospective Carlin-type host rock (i.e., limestone & andesite package similar to the Comus formation), b) a remarkably similar structural architecture between HSRP and the Getchell Trend of steeply dipping feeder faults and shallowly dipping thrust faults, c) alteration characteristics (i.e., decalcification of carbonate rocks and sulfidation of iron-bearing igneous rocks), and d) anomalous gold and pathfinder geochemistry occurring in predicted places spatially associated with feeder faults that intersect favourable host rocks and thrust faults. The cumulative Phase 1 evidence validates a proof of concept that a Carlin-type hydrothermal gold system may exist in the Hot Springs Range that has never before been recognized or explored.

At the Otis target, the anomalous geochemistry discovered by the Company occurs adjacent to the intersection of the inferred feeder faults with the prospective host rocks and thrust fault (Table 1 & 2, Figure 3). The prospective host rocks and thrust dip eastward where they are obscured by a thin veneer of younger, post mineral sediments and basalt flows. The Otis target occurs where multiple orientations of inferred feeder faults intersect the thrust fault and prospective host rocks at approximately 300 meters depth. Controlled-Source Audio-Frequency Magnetotellurics (CSAMT), a ground geophysical survey, will confirm the presence and depth of the conceptual Otis target beneath the post mineral cover.

At the Eden target the anomalous geochemistry discovered by the Company occurs in the immediate proximity to scarps of modern normal faults (Table 3, Figure 4). The modern scarps cut a thick package of post mineral cover.  Background soil samples of this cover yield <1.5 ppb Au. Gravity data indicate that these modern faults are long lived and are thus potentially reactivated feeder faults for a Carlin-type hydrothermal gold system. Recent earthquakes and rupture of modern faults has caused the surface expulsion of deeply sourced ground water along the sampled faults. The anomalous geochemical results indicate the expelled ground water has scavenged elements from a buried occurrence of gold mineralization. Further, the elemental makeup of the geochemical anomaly is indicative of a Carlin-type system.

Given both the Otis and Eden targets are largely obscured by post-mineral basalt and pediment, the Company has contracted a geophysical company to perform a CSAMT program.  The program is designed to identify where the deep-seated faults intersect the low angle thrust and prospective host rocks.  The Company expects to have results and interpretations from this program by late Spring, at which time it will design a drill program.

All scientific and technical information in this news release has been prepared by, or approved by Michael Dufresne, M.Sc., P. Geo., President and Principal of APEX Geoscience Ltd.  Mr. Dufresne is a qualified person for the purposes of National Instrument 43-101 - Standards of Disclosure for Mineral Projects. Information regarding production at adjacent properties has been taken from publicly available sources believed to be reliable, but the qualified person has not done any verification work and cannot confirm the accuracy of such reports.   Production or mineralization at such adjacent properties may not be indicative of the prospectivity for mineralization at the HSRP, and readers should not place undue reliance on such information. 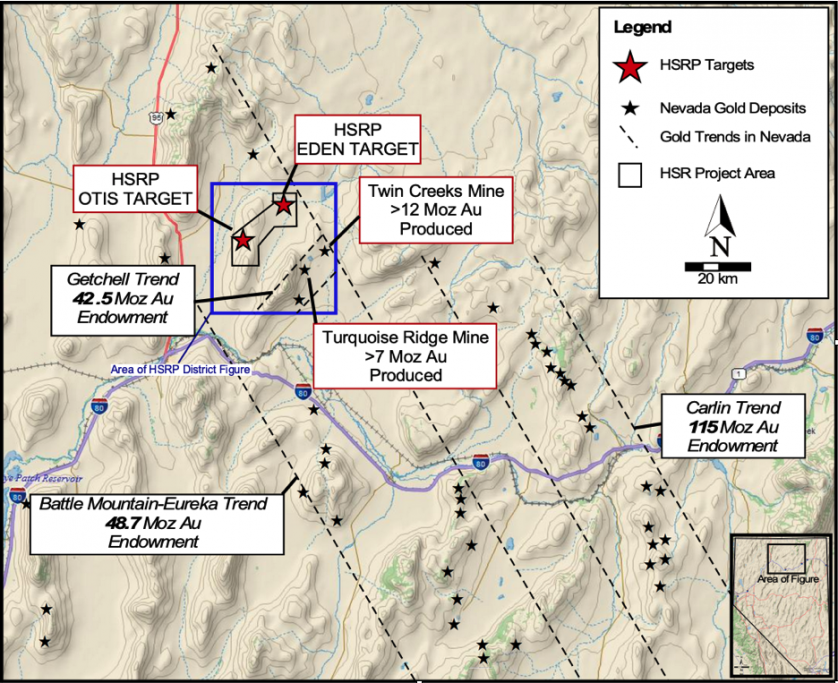 Figure 1. Plan view map of north-central Nevada and the major gold trends and associated deposit locations. The Hot Springs Range Project is located at the northern portion of the Battle Mountain-Eureka Trend and shares a similar oblique orientation as the nearby Getchell Trend. The blue box denotes the location of Fig. 2. 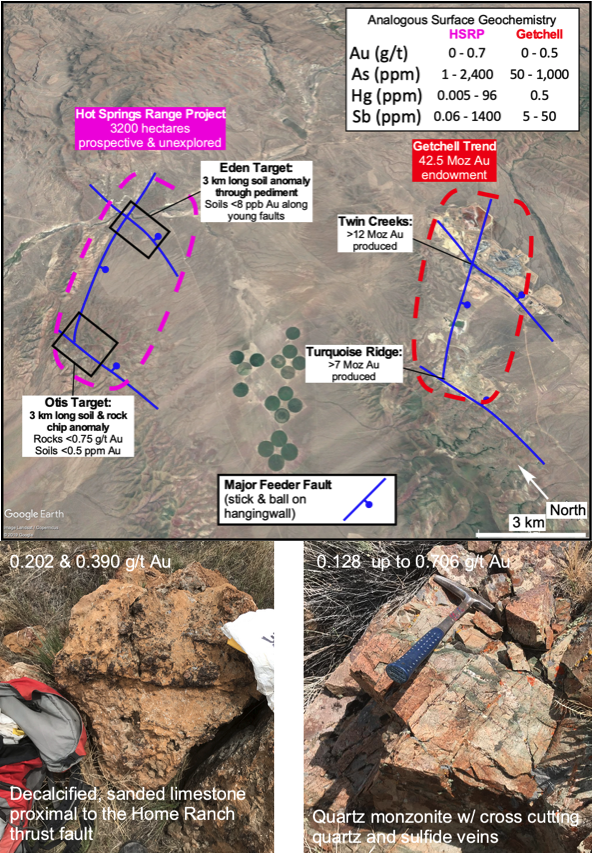 Figure 2. Top) Oblique northeast view map of the Getchell Trend and Hot Springs Range region. The two areas share analogous structural frameworks of reactivated high-angle normal faults that are the inferred feeder structures for the hydrothermal gold systems. The anomalous surface geochemistry between the two areas is also similar. Black boxes of the HSRP target areas denote the location of Fig. 3 and 4 plan maps. Bottom) Outcrop photos of the most prospective host rocks at HSRP. 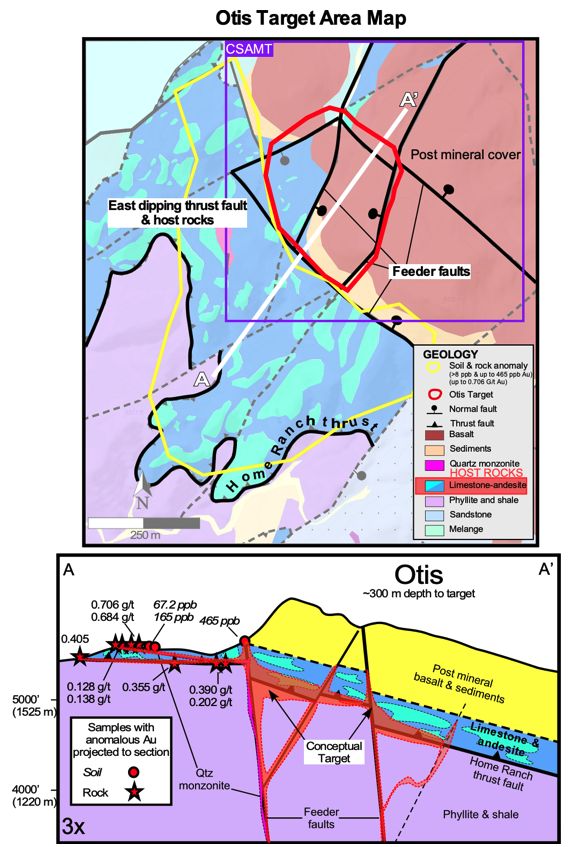 Figure 3. Otis Target. Top) Plan view geologic map with major vertical feeder and thrust faults (bolded black solid  lines) and the extent of the geochemical anomaly (yellow polygon) associated with the east-dipping host rocks that extend beneath the post mineral basalts & sediments. The intersection of the feeder faults with the thrust-host rock occurs beneath post mineral cover and defines the Otis target area (red polygon). The CSAMT survey extent (purple box) covers the fault intersection target area. Bottom) Cross section A-A’ through the Otis target with the respective localities of the most anomalous soil and rock samples projected onto the section.  The geochemical anomaly is inferred to occur on the western shoulder of a larger mineral occurrence to the east, where the feeder structures intersect the host rocks and thrust fault. 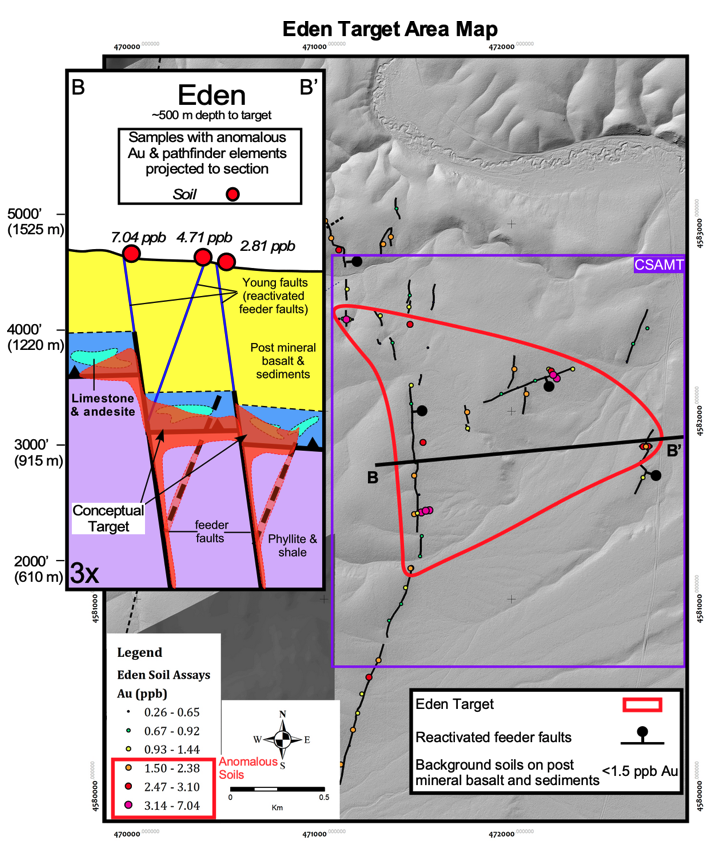 Figure 4. Eden target. Plan view map of a DTM with mapped fault scarps and soil samples. The most anomalous samples cluster where projected fault intersections occur to define the Eden target (red line). The CSAMT survey extent (purple box) covers the fault intersection target. Inset cross section B-B’ across the Eden target shows the conceptual target obscured by post mineral cover. Projected geology indicates that the same Otis host rocks and thrust occur at depth and are intersected by reactivated feeder faults. Anomalous soil samples along modern fault scarps are interpreted to be the result of pathfinder elements being scavenged from a mineral source at depth.

Table 1. Rock sample results from the Hot Springs Range Project – Otis Target area. Approximately 1 kg of material was collected for analysis and sent to the ALS lab in Elko, NV for preparation and then to Sparks, NV for analysis. All samples are assayed using 30g nominal weight fire assay with ICP finish (Au-ICP21) and multi-element four acid digest ICP-AES/ICP-MS method (ME-MS61). QA/QC programs for 2020 rock grab samples using standards, blanks and duplicates indicate good accuracy and precision in a large majority of standards assayed. Grab samples are selective in nature and cannot be consider as representative of the underlying mineralization.

Eminent Gold is a gold exploration company focused on creating shareholder value through the exploration and discovery of world-class gold deposits in Nevada. Its multidisciplinary team has had multiple successes in gold discoveries and brings expertise and new ideas to the Great Basin. The Company’s exploration assets in the Great Basin include: Hot Springs Range Project, Weepah, and Spanish Moon District.

This news release contains certain statements that may be deemed “forward-looking statements” with respect to the Company within the meaning of applicable securities laws. Forward-looking statements are statements that are not historical facts and are generally, but not always, identified by the words “expects”, “plans”, “anticipates”, “believes”, “intends”, “estimates”, “projects”, “potential” and similar expressions, or that events or conditions “will”, “would”, “may”, “could” or “should” occur.  Forward-looking statements made in this news release include the Company’s exploration plans for the Hot Springs Range property, the Company’s expectations for the potential of the Hot Springs Range property, and the Company’s plans for drilling on the Hot Springs Range Project.   Although Eminent Gold Corp. believes the expectations expressed in such forward-looking statements are based on reasonable assumptions, including the assumption that records and reports of historical work on the Hot Springs Range property are accurate and correct, such statements are not guarantees of future performance, are subject to risks and uncertainties, and actual results or realities may differ materially from those in the forward-looking statements. Such material risks and uncertainties include, but are not limited to, the Company’s ability to raise sufficient capital to fund its obligations under its property agreements going forward, to maintain its mineral tenures and concessions in good standing, to explore and develop the Company’s projects or its other projects, to repay its debt and for general working capital purposes; changes in economic conditions or financial markets; the inherent hazards associates with mineral exploration and mining operations, future prices of gold, silver and other metals, changes in general economic conditions, accuracy of mineral resource and reserve estimates, the ability of the Company to obtain the necessary permits and consents required to explore, drill and develop the Company’s projects and if obtained, to obtain such permits and consents in a timely fashion relative to the Company’s plans and business objectives for the projects; the general ability of the Company to monetize its mineral resources; and changes in environmental and other laws or regulations that could have an impact on the Company’s operations, compliance with environmental laws and regulations, aboriginal title claims and rights to consultation and accommodation, dependence on key management personnel and general competition in the mining industry. Forward-looking statements are based on the reasonable beliefs, estimates and opinions of the Company’s management on the date the statements are made. Except as required by law, the Company undertakes no obligation to update these forward looking statements in the event that management’s beliefs, estimates or opinions, or other factors, should change.