Navy Resources Corp. (TSX-V: NVY) (the “Company”) is pleased to announce that it has acquired an option to purchase the Spanish Moon Project (“Spanish Moon”) and Barcelona Property (“Barcelona”), collectively the “Spanish Moon District” or the “Property,” located approximately 13 km SE from the active Round Mountain mine that has produced over 15 million ounces of gold (Figure 1). The Property has been consolidated for the first time and is characterized by an 8 kilometer trend of skarn and epithermal styles of mineralization with four main zones of mineralization recognized to date (Figure 2). The Property has seen sporadic historical high-grade silver production from 1879 – 1922 at a reported grade of 25 ounces per tonne as well as limited historical drilling from the 1980s and 1990s that produced significant gold intercepts of 13.5 meters of 7.6 g/t Au, 25.2 meters of 2.2 g/t Au, and 1.5 meters of 24.5 g/t Au (See Table 1).

Navy has entered into an option agreement (the “Agreement”) with Nevada Select Royalty Inc (“Nevada Select”), a wholly owned subsidiary of Ely Gold Royalties Inc. (TSX-V: ELY, OTC-QX: ELYGF) (“Ely Gold”), whereby the Company will have the option to purchase 100% of Spanish Moon. It has also entered into a lease-option agreement with patent holders who own 87.25% of the contiguous Barcelona. The Company has up to five years to acquire a 100% interest in the Property, totaling approximately 600 hectares, consisting of 70 unpatented claims at Spanish Moon and 2 patented claims at Barcelona, by making cumulative cash payments of USD $1,395,000 and cumulative share payments of 1,250,000 common shares in the capital of the Company.

"The Spanish Moon and Barcelona properties represent an exceptional opportunity to explore a well-known historic gold district which has never been consolidated or explored systematically. The 8km land position sits on the other side of the Round Mountain pluton from the Round Mountain Mine and has numerous high grade silver and gold occurrences which provide multiple targets for a major discovery.”

“This acquisition marks our third project in Nevada that supports our goal of developing a high-quality exploration company that is pursuing major discoveries using new geological concepts within the Great Basin. The Spanish Moon District is an excellent complement to our Weepah and Hot Spring Range projects as the company considers it highly underexplored with multiple high-grade silver and gold occurrences.”

The property of The Spanish Moon District

The Property is located in Nye County, Nevada. The Property lies approximately 97 km north-northeast from the town of Tonopah, Nevada and thus has proximal infrastructure and is easily accessible, being within 1.5 hours drive of the town.

The Barcelona Target is centered on a historical high-grade silver mine that produced approximately 200,000 ounces of silver between 1871 and 1922 at a reported grade of 700 g/t from quartz veins that overprint skarn mineralization. Significant exposures of lower grade (+400g/t) silver were reported to have been left in the ground due to the high cost of milling and transportation and low silver prices at the time of production. In addition, field notes from that time indicate five mineralized bodies were encountered during the development of a long underground drainage tunnel. The two largest, the Oriental and Barcelona veins, have reported true widths of 31 and 26 meters respectively. It was further reported that these mineralized quartz sulphide veins extend for at least 1.1 km from the historical mine workings.  There has been no modern systematic grid sampling or trenching programs to test these targets, which represent a significantly large, near surface bulk mineable target.

The Antone Canyon Target is characterized by a weakly metamorphosed limestone that hosts high grade epithermal style gold mineralization that has been encountered in drilling, trenching, and rock chip sampling programs. Freeport-McMoran (1983-1985), Royal Standard Minerals with JV partner North Mining Corp. (1996 – 2000), and Golden Spike/Bullion River Gold/Antone Canyon Mining collectively took 1000 soil samples, completed 19 trenches totaling 5088 meters, and 63 drill holes for a total of 6430 meters. The majority of this work focused on finding Carlin-style deposits in silty limestones (Freeport-McMoran); however subsequent junior companies targeted high grade veins but faced low gold prices and lack of funding and were never able to expand on their successful trench and drill programs. The last drill hole on the property delivered one of its best intercepts delivered 13.5meters of 7.6g/t gold (see table 1). Currently the Antone Canyon Target has a gold in soil anomaly over 1.5 kilometers long that will be the focus of Navy’s exploration effort at the target area (Figure 4).

These targets are characterized by strong Mercury and Antimony mineralization that may represent the higher levels of an underlying precious metals system (Figure 3). Importantly these target areas have never been explored for precious metals.

As the district has never previously been consolidated and explored as a package, the company expects that a large, integrated exploration program, encompassing the entire district, may uncover the potential for large, high value precious metal deposits.

There is a Net Smelter Royalty (NSR) of 3% on the Property. The Company may make cumulative payments of US$1.0 million to reduce the royalties payable on the entirety of the Property to 2%. The Company is responsible for Property holding costs during the duration of the Agreement.

For the Barcelona Agreement, the total purchase price of USD $645,000 and 500,000 Navy Shares are payable as follows:

The Company is also pleased to announce that it intends to proceed with a name change to “Eminent Gold Corp.” (the “Name Change”) given the Company’s focus is on gold exploration. The Name Change is subject to TSX Venture Exchange approval and the Company will provide further updates regarding the Name Change, including the effective date.

All scientific and technical information in this news release has been prepared by, or approved by Justin Milliard, PGeo. Mr. Milliard is a qualified person for the purposes of National Instrument 43-101 - Standards of Disclosure for Mineral Projects. The following information is provided by 1) historical reports that describe mining activities, geology and potential, published by the Nevada Bureau of Mines as well as historical field notes and reports recorded in the Nye County records, 2) publically available reports from Royal Standard Minerals (annual reports and news releases) published on SEDAR between the years of 1997 and 2000 and 3) unpublished summary reports and news releases from Bullion River Resources describing exploration performed between 2003 and 2004.  It should be noted that the Company believes that all of these reports are reliable; however, the Company’s qualified person has not conducted verification procedures and therefore has not confirmed them. 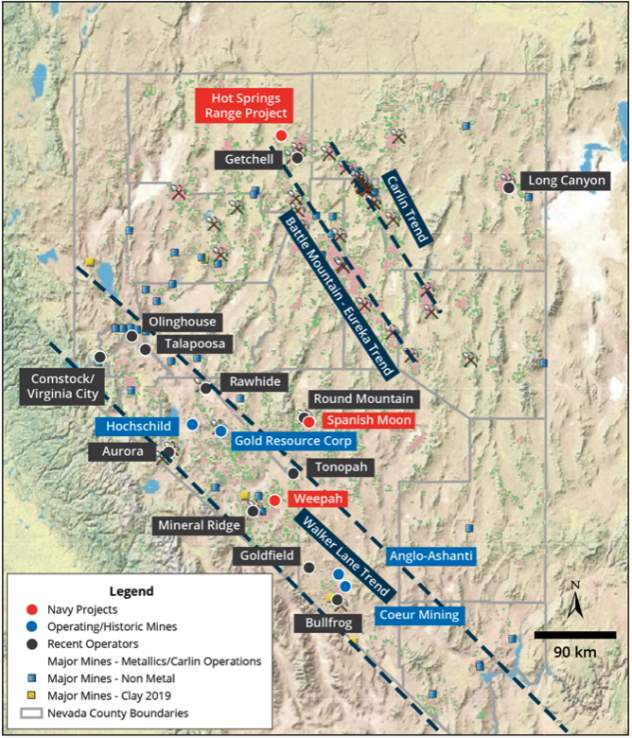 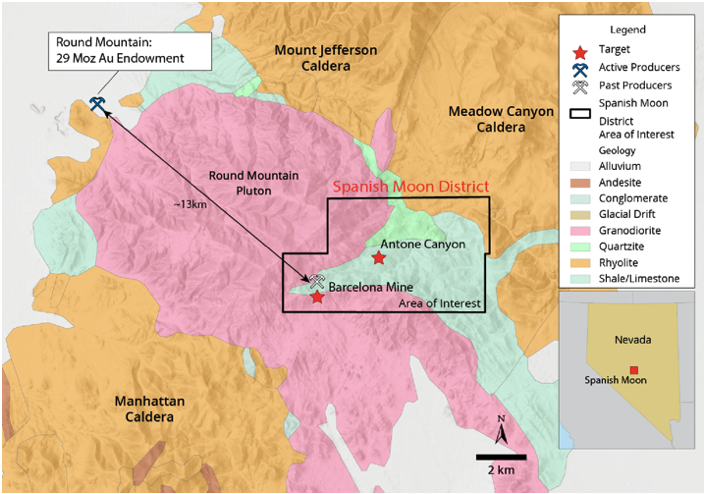 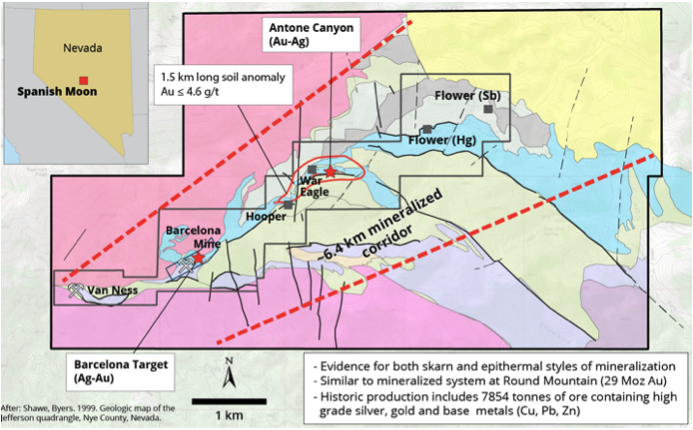 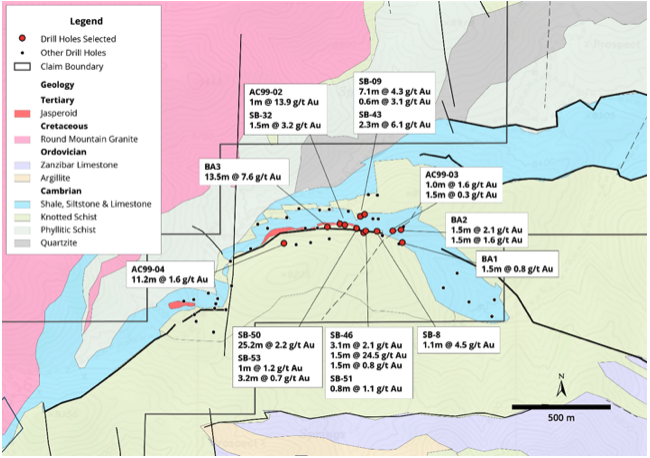 This news release contains certain statements that may be deemed “forward-looking statements” with respect to the Company within the meaning of applicable securities laws. Forward-looking statements are statements that are not historical facts and are generally, but not always, identified by the words “expects”, “plans”, “anticipates”, “believes”, “intends”, “estimates”, “projects”, “potential” and similar expressions, or that events or conditions “will”, “would”, “may”, “could” or “should” occur.  Forward-looking statements made in this news release include the Company’s exploration plans for the Weepah property, the Company’s expectations for the potential of the Weepah property, and the Company’s plans for drilling on the Hot Springs Range Project.   Although Navy Resources Corp. believes the expectations expressed in such forward-looking statements are based on reasonable assumptions, including the assumption that records and reports of historical work on the Weepah property are accurate and correct, such statements are not guarantees of future performance, are subject to risks and uncertainties, and actual results or realities may differ materially from those in the forward-looking statements. Such material risks and uncertainties include, but are not limited to, the Company’s ability to raise sufficient capital to fund its obligations under its property agreements going forward, to maintain its mineral tenures and concessions in good standing, to explore and develop the Company’s projects or its other projects, to repay its debt and for general working capital purposes; changes in economic conditions or financial markets; the inherent hazards associates with mineral exploration and mining operations, future prices of gold, silver and other metals, changes in general economic conditions, accuracy of mineral resource and reserve estimates, the ability of the Company to obtain the necessary permits and consents required to explore, drill and develop the Company’s projects and if obtained, to obtain such permits and consents in a timely fashion relative to the Company’s plans and business objectives for the projects; the general ability of the Company to monetize its mineral resources; and changes in environmental and other laws or regulations that could have an impact on the Company’s operations, compliance with environmental laws and regulations, aboriginal title claims and rights to consultation and accommodation, dependence on key management personnel and general competition in the mining industry. Forward-looking statements are based on the reasonable beliefs, estimates and opinions of the Company’s management on the date the statements are made. Except as required by law, the Company undertakes no obligation to update these forward looking statements in the event that management’s beliefs, estimates or opinions, or other factors, should change.