Navy to Acquire 100% Interest in Weepah Project in Nevada

Navy Resources Corp. (TSX-V: NVY) (the “Company”) is pleased to announce that it has entered into an option agreement (the “Agreement”) with Nevada Select Royalty Inc (“Nevada Select”), a wholly-owned subsidiary of Ely Gold Royalties Inc. (“Ely Gold”), whereby the Company will have the option to purchase 100% of the Weepah Project (“Weepah” or the “Property”). The Property is located in Nevada’s prolific Walker Lane Trend and is part of a larger mining district that has seen both historical production from underground workings as well as open pit mining (Figure 1).

"We are excited to acquire the option on Weepah as the property represents a unique opportunity that has seen little exploration using modern techniques and where, according to historical records, over 100,000 ounces of gold have been produced. We are looking forward to be the first to explore Weepah in a systematic manner and to test the significant upside we believe exists in the project.

This acquisition is an excellent complement to our Hot Springs Range Project (HSRP) which we also believe offers considerable gold discovery potential in a prospective district in Nevada. We are currently in the process of rapidly advancing HSRP’s first ever drill program.”

The Company has up to five years to acquire a 100% interest in the Property, totaling approximately 590 hectares, consisting of 76 unpatented claims and one patented claim, by making cumulative cash payments of USD $1,000,000 and cumulative share payments of 500,000 common shares in the capital of the Company.

Weepah is located in Esmeralda County, Nevada and is accessible from Highway 95.  It lies approximately 32 km southwest of the town of Tonopah, Nevada and thus has proximal infrastructure and is easily accessible.  The Weepah property is located within the Walker Lane Gold belt in western Nevada, which has seen recent exploration activity from major and mid-tier companies such as AngloGold, Coeur Mining, and Hecla Mining. Historically, the Walker Lane has produced large quantities of gold and silver from such notable areas as Virginia City, Tonopah, Goldfield, and Aurora Mining Districts.

Ely Gold published a 43-101 report on the property on May 4, 2016 which is available under Ely Gold’s profile on SEDAR. The following information is taken from that report. From 1935 to 1939, Weepah Nevada Mining Co. produced gold from 305,000 metric tonnes grading 5.8 g/t from an open pit and underground workings for a total of approximately 57,000 ounces. From 1986 to 1987, Sunshine Mining Co. produced at various grades approximately 60,000 oz. of gold averaging 3.1 g/t from an open pit mine (see Figure 2 for location of Weepah West Pit). Notable drill hole intercepts are detailed in Table 1. It should be noted that the Company believes that previous operators are reputable and, based on the disclosure set out in NI 43-101 reports filed by previous operators, is reported to have been conducted with proper quality assurance measures in place; however, a qualified person has not done sufficient work on behalf of the Company to verify either the production figures, nor drill results.

The gold mineralization at Weepah occurs within two broad shear zones (Figure 2). The western shear zone was the area exploited by the small open pit and by adjacent underground workings and has hosted all the historic gold production. The eastern shear zone was exploited by minor exploratory workings.  Both zones have been drilled by various operators between 1986 and 2015 and are now traced for hundreds of meters along strike and down dip (see Figure 3 for notable intercepts). Both eastern and western shear zones appear open to the south under shallow pediment and previous mapping suggests that the western shear zone appears to crop out on the south end of this pediment, albeit only two rock samples have been taken there.

The Company is planning an initial surface program designed to reveal the full potential of mineralization away from the main occurrences.  The Company anticipates that the program will include both grid-based soil samples in the shallow pediment and in areas of poorly exposed bedrock as well as extensive rock chip channel samples.  In particular, the pediment south of the main showings as well as the poorly explored outcrop areas south of the pediment need extensive work to reveal the true potential of the Property.  The Company expects to complete its surface work by the second quarter of 2021 and expects to be drilling within the second to third quarter of the year.

There is a Net Smelter Royalty (NSR) of 3% on the Property.  The Company may make cumulative payments of US$2.5 million to reduce the royalties payable on the entirety of the Property to 2%. The Company is responsible for Property holding costs during the duration of the Agreement.

All scientific and technical information in this news release has been prepared by, or approved by Justin Milliard, PGeo.  Mr. Milliard is a qualified person for the purposes of National Instrument 43-101 - Standards of Disclosure for Mineral Projects. 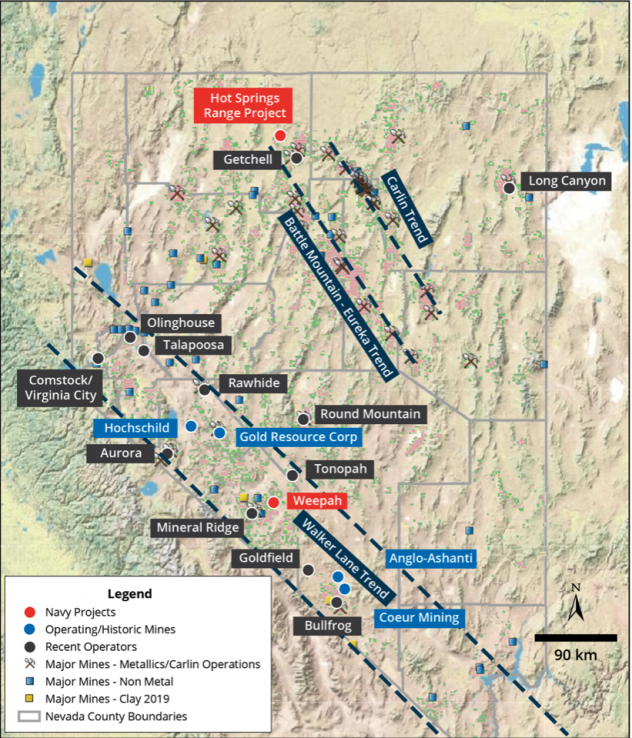 Figure 1. Location map showing where the Weepah Project is within the Walker Lane Trend, Nevada. 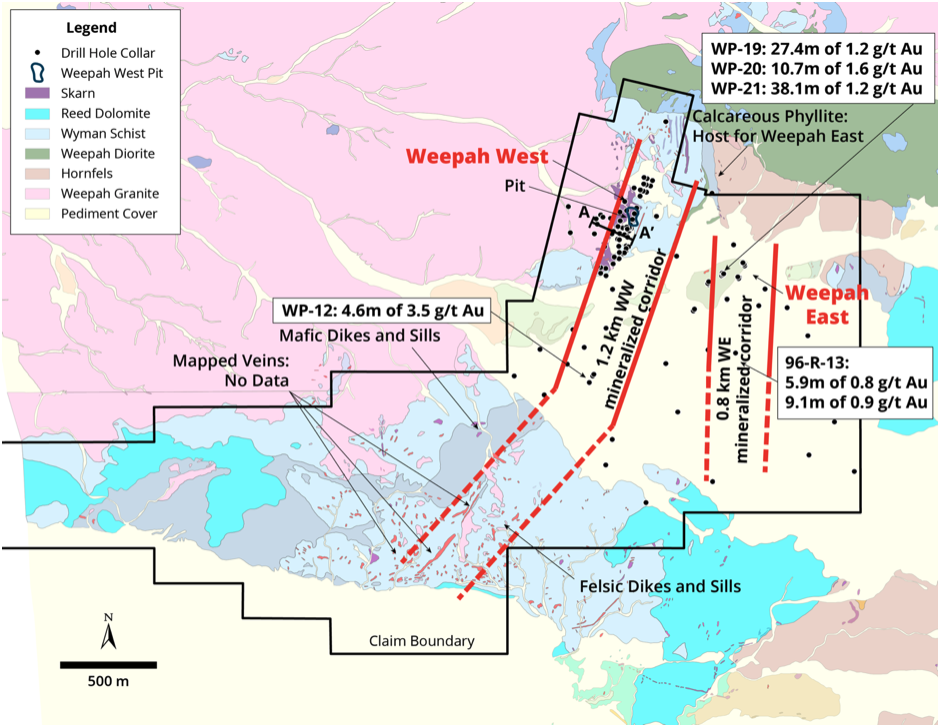 Figure 2.  Plan Map of the Weepah property showing geology, mineralized corridors and property boundary.  A-A’ is the trace of the cross section shown in Figure 3 with notable intercepts from that section reported in Table 1.  The collar locations for Weepah East, Weepah East extension and Weepah West Extension drillholes reported in Table 3 are shown. 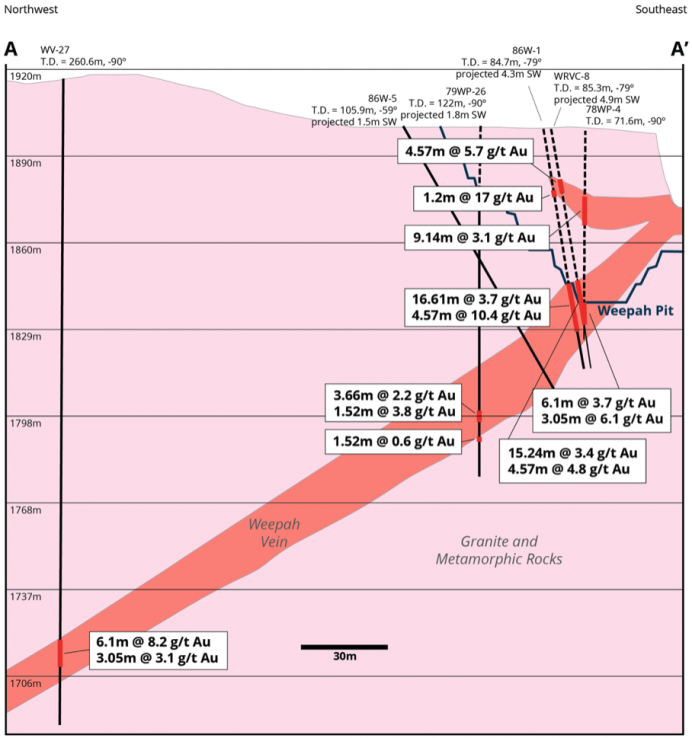 Figure 3.  Drill hole cross-section A-A’ through the Weepah Pit showing down dip extension of the Weepah West structure (see plan map in Figure 2 for trace location).  Note the mined-out area and that the intercepts from within the pit area are thus not applicable to future exploration potential.  The intercepts in Table 1 are only from areas that are not mined out.  The Ely 43-101 states that the conversion from ounce per ton applied in the report is 34.28 g/t per imperial ton.

Table 1. Notable Intercepts from the Weepah Property. True widths are best estimates from known orientation of structures related to drillhole orientations. All the intercepts are from drillholes in areas not previously mined.  The 43-101 report for which these intercepts were reported, converted opt to g/t using a conversion ratio of 34.28 g/t equals 1 opt. Notes: 1Approximately 1 km south of Weepah West Pit underlying shallow, prospective pediment. 2Approximately 500 meters south of Weepah East surface showing in shallow, prospective pediment. (See figure 2 for location and Figure 3 for intercepts from cross-section A-A’ from Weepah West).

This news release contains certain statements that may be deemed “forward-looking statements” with respect to the Company within the meaning of applicable securities laws. Forward-looking statements are statements that are not historical facts and are generally, but not always, identified by the words “expects”, “plans”, “anticipates”, “believes”, “intends”, “estimates”, “projects”, “potential” and similar expressions, or that events or conditions “will”, “would”, “may”, “could” or “should” occur.  Forward-looking statements made in this news release include the Company’s exploration plans for the Weepah property, the Company’s expectations for the potential of the Weepah property, and the Company’s plans for drilling on the Hot Springs Range Project.   Although Navy Resources Corp. believes the expectations expressed in such forward-looking statements are based on reasonable assumptions, including the assumption that records and reports of historical work on the Weepah property are accurate and correct, such statements are not guarantees of future performance, are subject to risks and uncertainties, and actual results or realities may differ materially from those in the forward-looking statements. Such material risks and uncertainties include, but are not limited to, the Company’s ability to raise sufficient capital to fund its obligations under its property agreements going forward, to maintain its mineral tenures and concessions in good standing, to explore and develop the Company’s projects or its other projects, to repay its debt and for general working capital purposes; changes in economic conditions or financial markets; the inherent hazards associates with mineral exploration and mining operations, future prices of gold, silver and other metals, changes in general economic conditions, accuracy of mineral resource and reserve estimates, the ability of the Company to obtain the necessary permits and consents required to explore, drill and develop the Company’s projects and if obtained, to obtain such permits and consents in a timely fashion relative to the Company’s plans and business objectives for the projects; the general ability of the Company to monetize its mineral resources; and changes in environmental and other laws or regulations that could have an impact on the Company’s operations, compliance with environmental laws and regulations, aboriginal title claims and rights to consultation and accommodation, dependence on key management personnel and general competition in the mining industry. Forward-looking statements are based on the reasonable beliefs, estimates and opinions of the Company’s management on the date the statements are made. Except as required by law, the Company undertakes no obligation to update these forward looking statements in the event that management’s beliefs, estimates or opinions, or other factors, should change.