Vancouver, Canada, October 21, 2021 – Eminent Gold Corp. (TSX-V: EMNT) (OTCQB: EMGDF) (the "Company" or “Eminent”) is pleased to announce positive results from its first phase surface exploration program at its Gilbert South project (“Gilbert South”), located approximately 71 kilometers (km) west of the town of Tonopah, Nevada (Figure 1) within the Walker Lane trend (total gold endowment of over 80 Moz Au and 700 M oz Ag[1]). Eminent’s technical team identified six target areas making the majority of the property (Figure 2) and rock column prospective for epithermal gold and silver mineralization (Figure 3). The primary target areas are the Pretty Boy/East Bound fault zone, Ohio fault zone, and Bighorn fault zone, all of which yielded multi-gram gold in rock samples. In the southern region of the property, the north – south trending Pretty Boy and East Bound fault zones have both mapped strike lengths of 2.5 km and returned values up to 30.7 g/t gold and 30.6 g/t gold, respectively. The Ohio fault zone located in the northern region of the property contains historical rock samples up to 8.4 g/t gold where veins are exposed at the terminus of a 1 km long fault zone. Table 1 presented below provides highlights from rock samples across the target areas.

Paul Sun, President and CEO of the Company commented:
"The results from our first phase of work at Gilbert South are very encouraging. We are confident that the results indicate mineralization occurs both laterally and vertically across the entire property. We look forward to prioritizing our drill targets in the next phase of work as we look to rapidly advance the project to drill stage.”

Work by the Company has focused on the three high-priority targets which were the focus of historic mining and are spatially associated with the highest temperature and most robust alteration anomaly across the property. Coincident with this alteration is a large ammonium (NH4+) anomaly (Figure 4), a unique chemical footprint known to mark the location and existence of a deep-seated hydrothermal pathway and often occurs in close proximity to gold mineralization[2] at epithermal deposits such as Waihi in New Zealand (8 Moz[3, 4]) and Hollister (425 Koz[5])in Nevada[6]. Based on these results the Company has staked an additional 150 hectares and plans to conduct a geophysical survey across the entire property to refine the geologic model and individual targets prior to the 2022 drilling season.

The Pretty Boy/ East Bound fault zone appears to be the largest hydrothermal alteration system hosted in volcanics, has the highest-grade samples, and is directly associated with the NH4+ anomaly. The Bighorn fault zone appears to be the western limit to the hydrothermal system associated with the felsic volcanic field and serves to down drop the system to the east (Figure 5). The Ohio fault may be a subsidiary, mineralized fault internal to the larger Sunset fault zone that forms the northern boundary of the volcanic field.

The Pretty Boy and East Bound fault zone is a 0.75 km wide zone of both stockwork veins and through going bladed calcite and quartz veins measuring 1-2 meters wide.  The exposure of the vein network along strike varies due to topography and post-mineral gravel cover, but individual vein outcrops can be linked for 2.5 km along strike. Vein textures from mine workings and outcrop indicate a very shallow level of the epithermal system is exposed, suggesting that the primary boiling horizon for epithermal system could be preserved at depth. Results of a soil survey performed during Phase I will serve to confirm the strike length and geochemical expression of the mineralized corridor.

The Bighorn fault zone is characterized by three subparallel faults, the easternmost of which has a semi-continuously exposed calcite vein that averages 1-3 meters wide and is 1.5 kms long.  The texture of the calcite vein, rhombohedral to banded, suggests the vein is the very shallowest exposure of an open fissure epithermal vein. At the northern extent of the Bighorn fault zone, the single vein horsetails into numerous en echelon veins within a poorly consolidated rhyolite dome. Results of the soil survey will serve to confirm the surface expression of this target and geophysics will again serve to image the potential for veins/silicified bodies at depth that are obscured by the volcanic edifice at the surface.

The Ohio fault is characterized by a 1 km long fault that traverses relatively benign topography and is thus not well expressed at the surface. One to two centimeter-wide quartz veinlets are observed in dump samples from within this fault zone. Historical rock samples include grades of up to 8.6 g/t Au.

The lower-priority vein systems are the Redback, Greenback and Indiana, that all are hosted in the younger sequence of mafic volcanics. The veins from these target areas are typically 1-2 meters wide and are chalcedonic in texture, indicating very shallow preservation above the boiling horizon.  Due to the lower apparent concentrations of gold within these targets, and the targets not being clearly associated with a regional structural framework they have been the secondary focus of exploration activity. Again, the pending soil results will yield additional insights for potential at these target areas.

“Our Phase I results strongly support our initial hypothesis at Gilbert South in that the existing exposures at surface are indicative of the upper portions of numerous epithermal systems and there could be potential for bonanza gold veins to exist just below our feet. We look forward to advancing this project to a geophysical survey stage and we expect to have numerous drill ready targets selected for the 2022 drilling season.”

Numerous historic prospect pits that were not on previous maps were discovered during Phase I field work. Following the soil survey (results pending), the Company’s technical team also conducted a 2-week reconnaissance mapping program consisting of field checking existing 1:24,000 scale mapping and rock sampling: numerous channels and chips were taken at existing outcrops near the historic mine workings for which the Company had no or extremely limited data, especially in the Pretty Boy-East Bounding fault area. The technical team also conducted a two-week spectral mapping program to refine the remote sensing alteration map using an ASD TerraSpec Halo mineral identifier which is a handheld spectrometer. Phase II exploration at Gilbert South will include a geophysical survey which will serve to verify the along strike continuity and depth of vein systems at all our targets (Figure 6).  Please see the Company’s website for further detail.

All scientific and technical information in this news release has been prepared by, or approved by Justin Milliard, PGeo. Mr. Milliard is Project Geologist for Eminent and is a qualified person for the purposes of National Instrument 43-101 - Standards of Disclosure for Mineral Projects. Some of the information herein is provided by 1) historical reports that describe mining activities, geology and potential, published by the Nevada Bureau of Mines as well as historical field notes and reports recorded in the Esmeralda County records, 2) unpublished summary reports and news releases from Orogen Royalties Inc describing exploration performed between 2015 and 2020.  It should be noted that the Company believes that all of these reports are reliable; however, the Company's qualified person has not conducted verification procedures and therefore has not confirmed them. 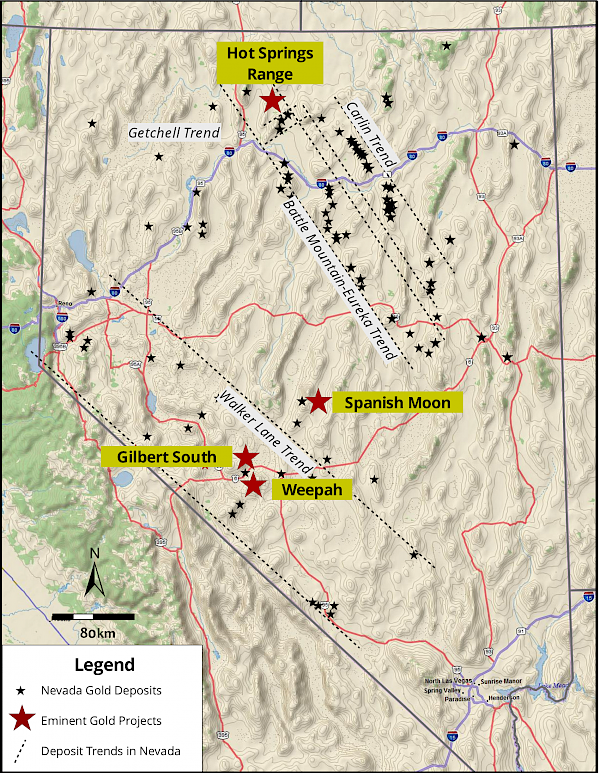 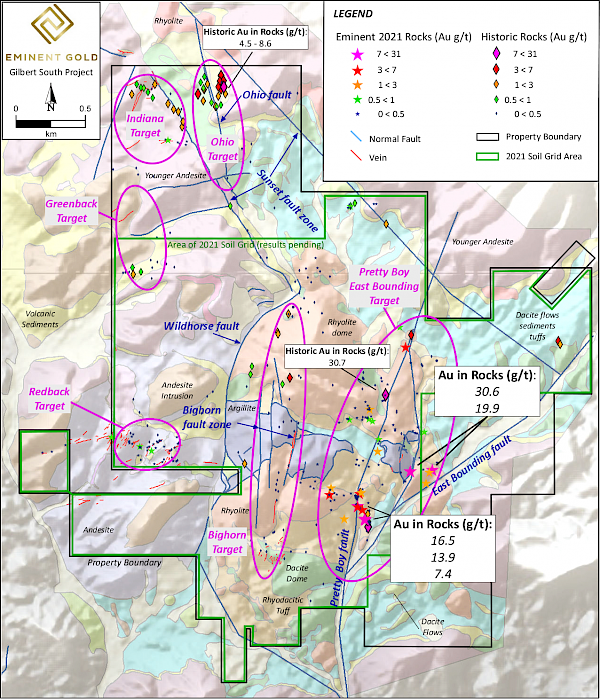 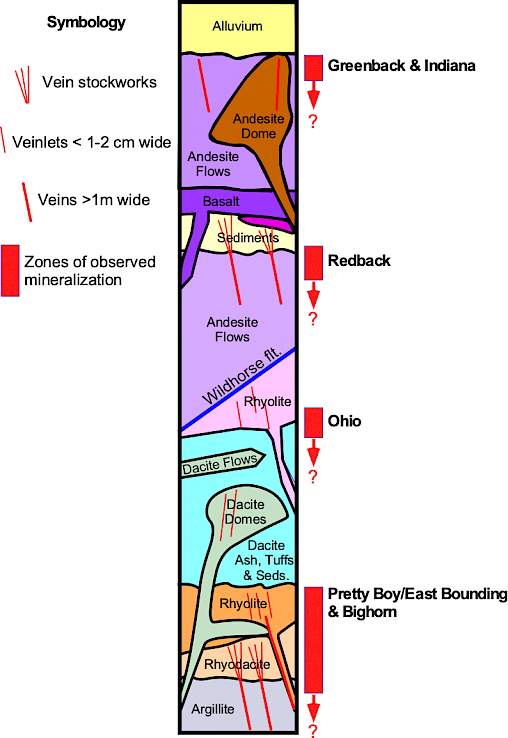 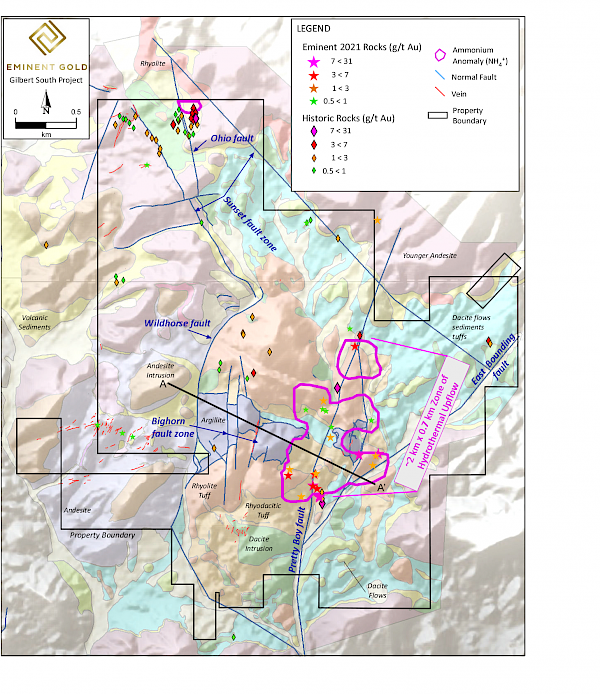 Figure 5.Cross section through the central region of the Gilbert South project. The recently identified Bighorn, Pretty Boy and East Bounding faults are associated with multi-kilometer long vein systems that mapping and alteration relationships suggests are part of a regional hydrothermal system. The inferred boiling horizon for the system is interpreted to occur at a relatively shallow depth beneath the current surface (yellow boxes). 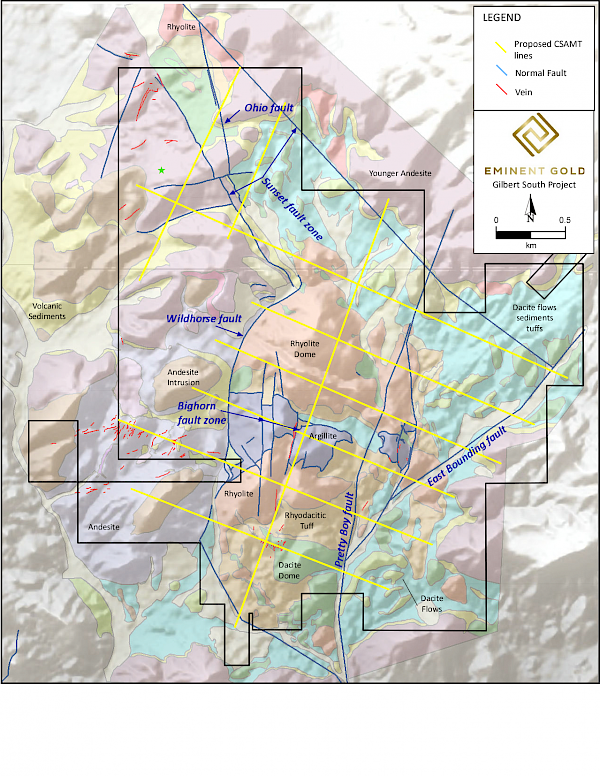 This news release contains certain statements that may be deemed “forward-looking statements” with respect to the Company within the meaning of applicable securities laws. Forward-looking statements are statements that are not historical facts and are generally, but not always, identified by the words “expects”, “plans”, “anticipates”, “believes”, “intends”, “estimates”, “projects”, “potential” and similar expressions, or that events or conditions “will”, “would”, “may”, “could” or “should” occur.  Forward-looking statements made in this news release include the Company’s exploration plans for the Gilbert South property, the Company’s expectations for the potential of the Gilbert South property, the Company’s plans for generating drill targets based on current information and the generation of information from the proposed geophysical survey. Although Eminent Gold Corp. believes the expectations expressed in such forward-looking statements are based on reasonable assumptions, including the assumption that records and reports of historical work on the Gilbert South property are accurate and correct and that the sampling results are indicative of the target areas as a whole, such statements are not guarantees of future performance, are subject to risks and uncertainties, and actual results or realities may differ materially from those in the forward-looking statements. Such material risks and uncertainties include, but are not limited to, the Company’s ability to raise sufficient capital to fund its obligations under its property agreements going forward, to maintain its mineral tenures and concessions in good standing, the Company’s assumptions may prove incorrect; changes in economic conditions or financial markets; the inherent hazards associated with mineral exploration and mining operations, future prices of gold, silver and other metals, changes in general economic conditions, accuracy of mineral resource and reserve estimates, the ability of the Company to obtain the necessary permits and consents required to explore, drill and develop the Company’s projects and if obtained, to obtain such permits and consents in a timely fashion relative to the Company’s plans and business objectives for the projects; the general ability of the Company to monetize its mineral resources; adverse weather conditions may affect the Company’s ability to conduct work programs, availability of qualified personnel, changes in environmental and other laws or regulations that could have an impact on the Company’s operations, compliance with environmental laws and regulations, dependence on key management personnel and general competition in the mining industry. Forward-looking statements are based on the reasonable beliefs, estimates and opinions of the Company’s management on the date the statements are made. Except as required by law, the Company undertakes no obligation to update these forward looking statements in the event that management’s beliefs, estimates or opinions, or other factors, should change.